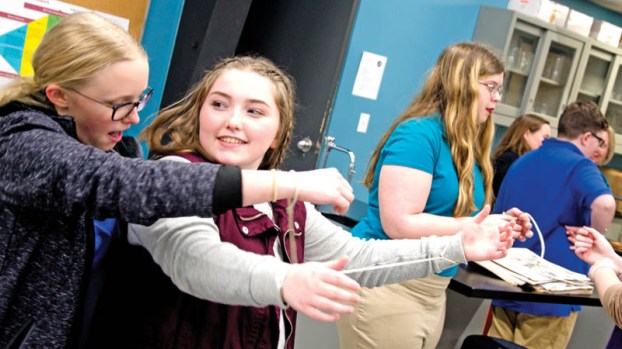 Sarah Stokeley, left, and Brianna Stokeley work to escape the “Infinite Handcuffs,” as part of the design challenges at enrollment night at the Tri-State STEM+M Early College High School on Thursday.

Was open to parents, prospective students

SOUTH POINT — The Tri-State STEM+M Early College High School hosted an enrollment event on Thursday at the school, giving prospective students and families a chance to see what is offered.

The school, which opened in August 2017, serves as a public school independent from Lawrence County school districts and focuses on science, technology, engineering, math and medical education for ninth through 12th grades.

In addition to tours of the campus, attendees were able to take part in design challenges, such as “Infinite Handcuffs,” in which they had to escape from a system of ropes tying two people together, and building towers from spaghetti noodles and tape to hold weight.

Lead teacher Alicia Spears said students at the school have had a busy semester so far, recently hosting a Veterans Day event in which 10 veterans were guests, taking part in the WKEE peanut butter drive and the school’s virtual reality team won the People’s Choice award at the West Virginia Makers competition.

This was the first year that the STEM+M school was included in Ohio’s annual school report cards, and students earned a higher grade than other high schools in the county in some areas, receiving an A for Gap Closing, which shows how well schools are meeting the performance expectations for most vulnerable students in English language arts, math, graduation and English language proficiency, and a B for Achievement, which represents whether student performance on state tests met established thresholds and how well students performed on tests overall.

The school received Bs in the Performance Index and Indicators Met subcategories within Achievement. Its 83.3 percent score in state testing was the highest within the county’s high schools.

Spears said the school will host another enrollment day on March 12 at 6:30 p.m.

Activities through Saturday at chamber of commerce SOUTH POINT — Holiday festivities are taking place this weekend at the Lawrence... read more