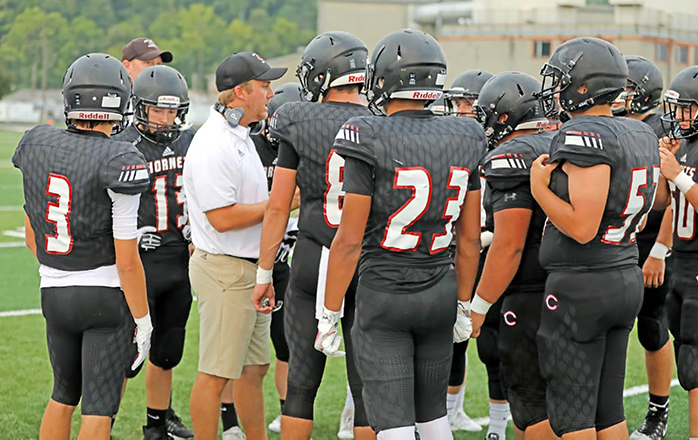 Head coach Evan Ferguson talks with his team during the Ohio Valley Conference preview this past season. Ferguson is leaving the Coal Grove Hornets’ program to take a similar job with the Boyd County (Ky.) Lions. (Photo Courtesy of Tim Gearhart)

COAL GROVE — There’s a reason you call them “tough decisions.”
Coal Grove Hornets’ head football coach Evan Ferguson had to make one of the toughest decisions in his young career when he accepted the job as head coach of the Boyd County Lions on Tuesday night.
“It was a tough decision to leave Coal Grove,” said Ferguson who was an All-Ohio quarterback and led the team to back-to-back playoff appearances.
“Coal Grove means a lot to me. It wasn’t an easy decision, but it was the best decision for me. I really think we can do something special (at Boyd County).”
In his two seasons as the Hornets’ head coach, Ferguson posted a 15-8 record. In his first season as a head coach, he guided Coal Grove to an Ohio Valley Conference title, an 11-2 record and to regional runners-up in Region 23 of Division VI.
“I wish the best in the future to Coal Grove. I appreciate all the support from all the community, the administration, the teachers, the parents and the entire Coal Grove football team the past two years,” said Ferguson.
“It’s hard to say good-bye to the people at Coal Grove.”
Boyd County presents quite a challenge for Ferguson. The Lions’ program has been dormant for years including 2-8 last season and 0-10 the previous year.
But Ferguson said Boyd County wants the same thing every program desires: to win.
“I want to do some things to make it exciting again. People don’t think it’s a place to be, but I think I can build a program. There are enough kids there to do that. It’s going to take some time.
“The support is there. They want to win. I’m excited to get started. I’m looking forward to opening up a new chapter,” said Ferguson.
Fortunately for the new head coach, Kentucky has spring football which will allow him to jumpstart his program.
“We need to get our system in and get everyone acclimated to what we want to do. I’m excited,” said Ferguson.

COLUMBUS, Ohio (AP) — Maybe both teams already were looking ahead to The Game. Whatever it was, Michigan and Ohio... read more