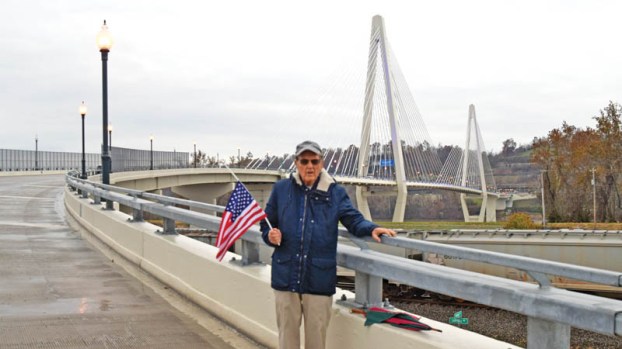 Bill Neville, 91, a World War II veteran of Ironton, walks across the span of the Oakley C. Collins Memorial Bridge on Monday. Neville has done the walk each year since the bridge opened in honor of his brother, Fred, who died in 2017.

As he has done for three years now, Bill Neville, of Ironton, walked the span of the Oakley C. Collins Memorial Bridge this week.

Neville began his yearly trek on Nov. 23, 2016, when he walked both the current bridge, on its opening day, and that of its predecessor, the old Ironton-Russell Bridge, which was still standing at the time.

Neville’s brother, Fred, who lived in Deering, was carried across the old bridge as baby, by his mother, Birdie Neville, and grandmother, Lucinda Blankenship, shortly after its opening and dedication in 1922.

Fred was too ill to attend the opening of the new bridge, so Bill walked both bridges.

“One for me and one for my brother,” he said at the time.

Both Bill and Fred, who died on April 2, 2017, at age 94, are veterans of World War II and the family has attended Community Mission Church in Deering since 1937.

Since Fred’s passing, Bill has continued the yearly walk across the new span, in memory of his brother.

Bill, 91, is active and in good health. He says he keeps in shape with swimming and walking the track and is a regular visitor to the YMCA.

The Oakley C. Collins Memorial Bridge, dedicated to the late state senator, is a two-lane cable-stayed suspension bridge and was the project of four years of construction that began  in 2012.