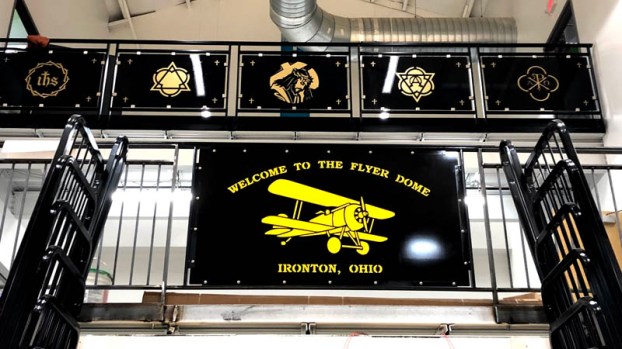 A place to call home

By Will McCollister, Tribune contributor

Home court advantage can go a long way in the game of basketball — the Cameron Crazies at Duke, on top of the opposing teams players as they try to inbound the ball, or the sea of green that floods through the entrance into Boston Garden at Celtic games are some of the places that come to mind.

But, for 49 years, The St. Joseph Flyers have not had a place to call home. Since the 1970 season, the Flyers played their home games at Ironton’s middle school gymnasiums — that is until this year.

The Parish Life Center will house St. Joseph’s home basketball games, starting Nov. 30. The 18,000-square-foot facility boasts six basketball rims, and over 500 seats so that the fans can cheer on the Flyers, but, like any ambitious act, there were some obstacles that needed to be overcome.

“My dad used to have a saying ‘can’t died in the poor house’,” Father David Huffman, priest overseeing the Catholic churches in the Ironton area, said. This saying embodies the attitude of the people in the Catholic community in Ironton.

The effort from the community has put in place a state of the art new facility with a unique twist.

“At the beginning I said that it not only has to be a church facility, but it has to look like one,” Huffman said. Every corner of the facility is decorated beautifully with hallmarks of the Catholic faith, but maybe the most stunning part is the stained glass that graces the building.

Prior to a fire over 20 years ago, the glass had belonged to The Church of Annunciation in Mingo Junction. The glass has been refashioned to depict the seven sacraments in the entrance and two twin crosses that adorn each facade.

On Friday, the Flyers will open their season. Fans will walk into a building to cheer on the boys and girls of St. Joseph Central Catholic High School, but this will not be just any building to them.

When they walk in they will see a metal sign with an old biplane on it, with “Welcome to the Flyer Dome” etched across the top and a “St. J” at center court.

No, this is far from a building to those that proudly wear the purple and gold. To them, this is home.

COAL GROVE — Friday marked the start of the Christmas shopping season and it is also the time people begin... read more