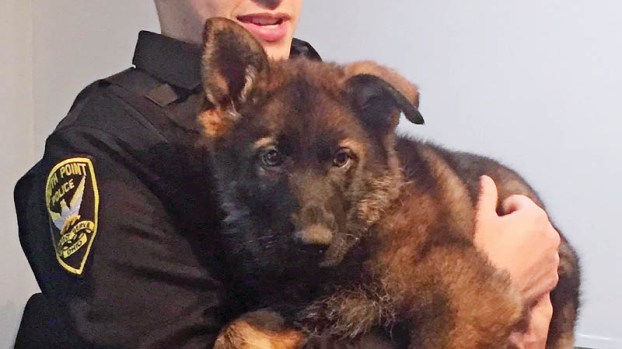 Ptl. J Reyes holds “Ammo,” a German Shepherd puppy donated to the South Point Police Department. Ammo will undergo training and will serve as the department’s K-9 dog for narcotics and apprehension. Police chief Chris Mahjer said the dog will be ready to hit the streets by summer.

SOUTH POINT — A new member has joined the South Point Police Department.
Chief Chris Mahjer told the village council at their meeting on Tuesday that the department was recently donated a German Shepherd puppy.

He said he had resisted the idea until now, but the fact that the dog was donated and at no cost to the village made him willing to give it a try.

Mahjer said the cage for the dog, named Ammo, and supplies have also been donated and that the animal will undergo training and can be ready for narcotics and apprehension work within months.

“He’s from a good lineage,” Mahjer said of the dog, and added that the department was enthusiastic. “We didn’t have any lack of officers who wanted to get involved.”

He said the dog’s trainer works exclusively with police and K-9 unit dogs.

The department is seeking donations to obtain the equipment and services such as a vehicle K-9 insert, heat sensor and other items. Those interested in donating can contact Sgt. Lennie Abrams at 740-377-4011.

• Approved a bid from McDaniels Electric for a generator for the sewage plant and voted to accept a grant for the project.

• Discussed changes to village ordinances and codes for matters such as junk cars and nuisances. Solicitor Randy Lambert has been working to revise the code by combining items, with fees added in some areas. Lambert said copies of the proposed changes will be sent to council members to review and discuss at a future date.

• Voted to modify salaries for village employees, which Mayor Jeff Gaskin described as the “raise ordinance” and the “normal salary increase” that takes place in December.

Council member Bill Patrick voiced some objection, feeling that the matter needed more discussion. Gaskin agreed that changes could be made, but said it should be brought up  during the year before the December vote. The council approved the ordinance, 4-1, with Patrick voting no.

• Agreed to make a payment and refinance the five-year loan, through the Neighborhood Investment Program, that was used to build village hall, rather than pay off the full balance.

• Heard from fire chief Mark Goodall, who said crews responded to two house fires in the past month, which are still under investigation by the state fire marshal.

He said the department has applied for three grants for equipment — a fire marshal grant for breathing equipment and masks, a grant for mobile and portable radio equipment and a workman’s compensation grant, which would be used for gear washing and drying equipment.

He said work on replacing the clarifiers at the sewage plant is nearly complete, with demolition started on the fourth and final clarifier. He expects the project to wrap up by the end of December.

• Discussed White Cottage Cemetery, including efforts by Patrick to secure grant funding to build a wrought-iron fence and gate around the cemetery.

The council voted to purchase adjacent land last year to expand the cemetery. Gaskin said this is being surveyed and divided into lots, which they hope to sell for plots at about $1,000 each. The mayor said he has several people interested in buying when they go on sale, including himself, and the sales would pay back the money spent.

• Set a date for January’s meeting of council. Due to the New Year’s holiday falling on the regular first Tuesday meeting date, the session was moved to Tuesday, Jan. 8 at 7:30 p.m.

If you were at the Lawrence County Courthouse on Tuesday morning, you may have noticed two things. One was that... read more