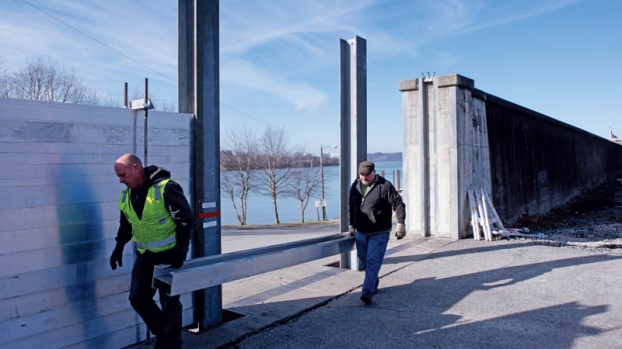 Shawn Summers and Mike DePriest, Ironton Street Department workers, take down the floodgate on Friday after a mock gate closure exercise. The exercise is done to make sure all the parts to the gate are available and fit together.

Part of a mandated preparedness exercise

On Friday, many people in Ironton were wondering why the floodgates were put up and blocking access to the boat ramp.

There was no flooding and no cause for alarm, it was just a mock gate closure exercise so the city’s Flood Control Department could make sure that they had all the parts and pieces for the flood gates and that they all fit together properly.

Mike Pemberton, the Flood Defense superintendent, said that the city is required by the U.S. Army Corps of Engineers to put up the gates up every three years.

One of the gates they put up was on Center Street and is a modified gate with steel upbeams and aluminum panels to hold back flood waters. Workers took part of the gate around 1:30 p.m. on Friday to again allow traffic to flow again.

The older-style steel and wooden timber gates were already up at Hecla, Etna, Railroad, Mastin and DT&I streets. They also did a mock closure at Mill Street.

Pemberton said that the older gates are quite heavy with beams weighing at around 1,500 pounds.

“That’s just one and there are three beams with that to build a truss,” he said. “It takes about eight to 10 hours to put up just that gate.”

There are 19 gates in the city’s flood system and when it comes time to put them up, the flood department, which only has two workers, pulls workers from the street department, santitation department and the water distribution department.

Pemberton said they rarely ever have to put up all 19 gates.

For an indication of how much flooding that is, at 58 feet high, the Ohio River rises to within approximately five feet of the Center Street gate.

The city has four other gates, but those would only be used with very heavy flooding, since to close those gates would require cutting into the railroad tracks.

To get permission to do that would require permission from Norfolk and Southern Railroad company along the state and federal government since it would affect train travel throughout the region.

“We wouldn’t make that decision ourselves,” Pemberton said. “They all would have to be heavily involved with the decision making.”

The closest the city came to making that decision was in the 1950s or 1960s but the river didn’t rise that high.

Getting out to go shopping can be difficult when you’re a senior citizen, especially for those in retirement homes. With... read more