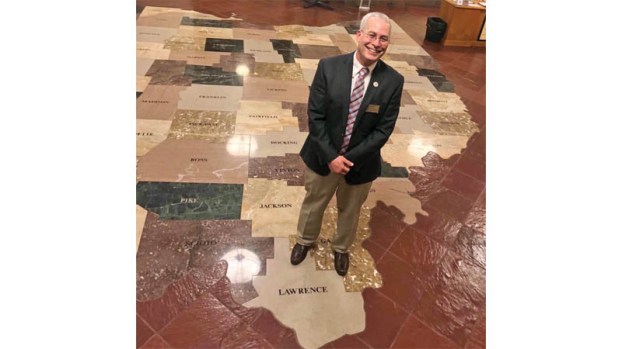 Lawrence County Commission president Bill Pratt is seen at the Ohio Statehouse in Columbus, in this photo taken by County Auditor Jason Stephens. Pratt, who died Friday at age 45, was a Republican and former member of the Chesapeake School Board. He was in his second term as commissioner.

‘He loved Lawrence County and we loved him’

CHESAPEAKE— Tributes poured in over the weekend, as officials and locals mourned Lawrence County Commission President Bill Pratt, who died Friday at age 45.

Lawrence County Commissioners DeAnna Holliday and Freddie Hayes Jr. issued a joint statement on the loss of their fellow commissioner.

“We are heartbroken over the passing of our friend and colleague, Commissioner Bill Pratt. We earnestly pray for his family and send our heartfelt condolences to them,” the statement read. “Our county feels the loss of this valued public servant. We urge all to pray for his family in their bereavement and also for their future.”

Pratt, a Republican from Chesapeake, was elected to the commission in 2011 and was in his second term. He previously served on the Chesapeake Board of Education.

“Our hearts are deeply saddened by the loss of our good friend,” Lawrence County Sheriff Jeff Lawless said in a news release.

According to a news release from the sheriff’s office, deputies received a call of a possible shooting at 2868 County Road 35 in Chesapeake at about 7 p.m. on Friday. Deputies discovered Pratt, who they said had suffered a single gunshot wound. Lawrence County EMS arrived on scene and provided care to Pratt. He was transported to Cabell-Huntington Hospital, where he was later pronounced dead, the sheriff’s office said.

Although no foul play is expected at this time, this case remains under investigatin with the assistance of Lawrence County Coroner Dr. Ben Mack, Sheriff Lawless said.

A graduate of Chesapeake High School and The Ohio State University, where he obtained a dairy science degree, Pratt, was the owner of Pratt Dairy Farm in Chesapeake.

Pratt took great pride in his farm and was an advocate for agriculture in the county. In September 2017, when hosting the commission’s weekly meeting at his farm, he pointed out that he was the last remaining dairy farm in the county, which, at one time, was home to 165 farms.

Milk from Pratt’s farm was sold in a number of supermarkets in the region, identifiable, as he pointed out, by the stamp “5440.”

Pratt’s brother also owns Pratt’s Greenhouse, and he said the stretch of road between the two businesses was the only place in the county where all four food groups were produced. Pratt’s farm was a stop on the annual county farm tour, and he served as a judge for the dairy cattle competition, which made a return to the Lawrence County Fair this year.

Pratt was also celebrated for his ability to work with members of the opposite party.

When Democrat DeAnna Holliday won the election to the commission in 2016, breaking up the Republican Party’s full control, Pratt congratulated her on her victory and told The Tribune on election night that he looked forward to working with her and that there would be no partisan strife.

“He had a servant’s heart, he loved our county and wanted only good for the people of Lawrence County,” she wrote. “There was no ‘I’ in our team. The three of us had a working relationship that was taking our county to new heights. There were no politics involved in our decision-making, only genuine respect and care for one another and the people of our county. I can’t imagine a stronger team of colleagues. Bill offered intelligence, experience, understanding and his best offering was his soothing voice and smile that got us through so many situations.”

Pratt’s fellow Republican Hayes posted a video tribute to his colleague, featuring photos of their work together.

“I offer up this tribute to the man I’ve known and worked beside for many years,” Hayes said in his introduction. “We never truly know the depth of pain people face. Let’s come together Lawrence County! We have much to accomplish. Rest In Peace, Bill Pratt.”

Tributes to Pratt came in from across the region.

“The Lawrence County Veterans Service Commission and Office staff are deeply saddened on the loss of our County Commissioner Bill Pratt, praying for his family, friends and the county as a whole,” a statement online read.

“All the county is heartbroken with the loss of a great man,” Leighty wrote on his office’s Facebook page. “Thoughts and prayers go out to the family, friends and every stretch of the county that is feeling this pain. Commissioner Bill Pratt will surely be missed!”

“We are saddened to learn about the passing of Commissioner Bill Pratt,” it read. “Mr. Pratt was a devoted public servant and a valued friend of Collins Career Technical Center. Our thoughts are with his family, friends and the citizens of Lawrence County.”

“With a very heavy heart this evening, we would ask everyone to please pray for the family of Lawrence County Commissioner Bill Pratt,” a message from the group read. “A very sad day in Lawrence County today.”

“Words cannot express how heavy our hearts are tonight at the devastating news of the passing of Lawrence County Commissioner Bill Pratt,” the message on social media read. “He loved Lawrence County and we loved him. We will all miss him dearly. Please keep the Pratt family in your prayers.”

“Our deepest sympathies go out to Bill’s family and to the Lawrence County community,” Portman said. “Bill was a respected leader and popular public servant, and we will miss his many contributions to Southern Ohio.”

The commission announced that Tuesday’s meeting is set for 11 a.m., and would feature commemorative remarks on Pratt. The meeting will also be live streamed, with issues regarding the budget also on the agenda.

Funeral services for Pratt are set for 3 p.m. Wednesday at Hall Funeral Home and Crematory, 625 State Route 775, Proctorville. Visitation will be 4-9 p.m. Tuesday at the funeral home.