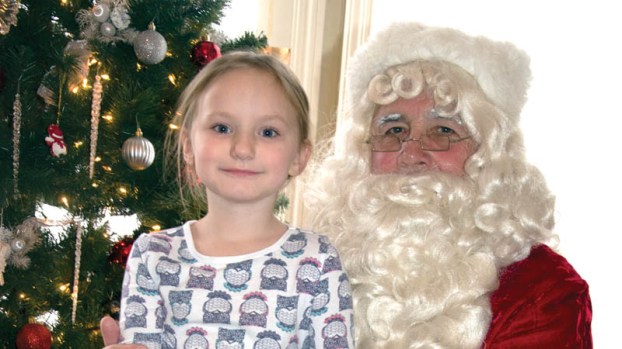 SOUTH POINT — With only a few weeks to go, people got into the holiday spirit throughout Lawrence County on Saturday.

At South Point High School, the meal with Santa was accompanied by a Christmas market, in which vendors got sell their wares. Many of those with booths were local crafters.

Bomb Diggity Bath and Beauty featured bath bombs and other skin and moisturizing products, all made locally, while Elaine Whitfield, whose company Laine’s was selling items she had knitted and crocheted, such as scarves and hats.

“Our most popular is the ponytail hat,” she said, adding that she attends and sets up at several markets during the season, starting in the fall.

The event takes place each year and there were activities for the children, such as inflatables and face painting. It is organized by People for the Point and all proceeds go to future community activities by the group.

Later that day, at the Lawrence County Museum, Santa arrived in the afternoon to meet with visiting children.

Kay Rader, of the museum, said it was one of their last events for the year. They were set to host the winners of their school essay contest on Sunday, followed by a Christmas Carol sing-along at 1 p.m. on Sunday, Dec. 16.