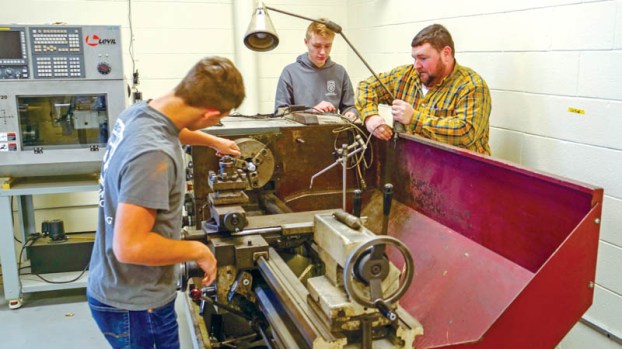 The advanced manufacturing program at Collins Career Technical Center recently received a sizeable donation from from DJ Manufacturing of Burlington in the form of an industrial lathe and an industrial milling machine.

“It’s a pretty sizeable donation,” James Woda, technical academy supervisor for the school, said, adding that this would allow for tasks to be performed that been required manually.

In other news, students in the school’s clean energy and energy empowerment programs recently worked with an auditing company on the school’s needs.

Dayton Energy Optimizers USA has been conducting the audit.

“They are fantastic to work with,” Woda said, adding that the company’s CEO has a background in education. “He really knows how to present information.”

Students from the clean energy program have job shadowed employees from the company as they toured CCTC’s main campus, while students in the energy empowerment program counted light fixtures and calculated energy use.

“Then both of them went to Coal Grove and did it on their own,” Woda said of the programs.

He said students then got together and put together a presentation to the board of education, recommending changes the school could make.

“This could include putting energy efficient solar panels on the roof,” Woda said.

“They told one of them, ‘If you move to Dayton, we will take you on as an employee,’” he said.