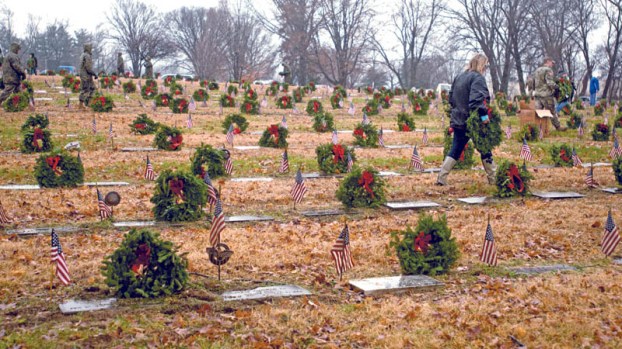 On Saturday, volunteers placed 719 wreaths on the graves of veterans at Woodland Cemetery as part of the annual Wreaths Across America. It was the sixth one held in Lawrence County.

Despite the heavy rain on Saturday morning, the volunteers showed up to place wreaths on several hundred graves of military veterans in Woodland Cemetery in keeping with Wreath Across America’s motto of “Remember, Honor, Teach.”

Linda Dalton, the local Wreaths Across America coordinator along with Juanita Southers, said they had 719 wreaths this year, the highest number they have been able to purchase with the donations from local citizens and businesses.

She said there are around 1,200 veterans buried in Soldier Circle.

“And we have never been able to raise enough funds to cover the whole thing,” she said. “But we do have enough for two-thirds this year. But we are really happy; we raised more donations this year than we did last year. People have really come through and we appreciate it.”

Col. Mike Graese, U.S. Army retired and the city manager of Ashland, Kentucky, spoke at the ceremony. He said that he had heard of Wreaths Across America but didn’t know the background of it.

“So, like any red-blooded American, I went on Google and searched it,” he admitted.

The owner of Warchester Wreaths made a trip to Washington, D.C. when he was just a boy and it made a huge impression on him. In 1992, the company found themselves with excess wreaths and decided to donate them to Arlington National Cemetery.

Graese said the concept grew, but it wasn’t until a picture of the wreaths went viral in 2005 that it really picked up. Wreaths Across America was formed.

“In 2014, Wreaths Across America’s national network laid 700,000 memorial wreaths at 1,000 locations in the U.S. and beyond, including the Pearl Harbor Memorial, Bunker Hill and the sites of the Sept. 11 tragedy,” he said, adding that it was accomplished by people just like those gathered at Woodland Cemetery.

Speaker Lt. Col. John W. Turner, senior Army instructor for Lawrence County High School, in Louisa, Kentucky said he was humbled and honored to speak at the ceremony that honored our nation’s finest.

“The heroes around here and around the country share a common bond — they posses the values of loyalty, duty and respect, selfless service, honor, integrity, respect and personal courage,” he said. “All the qualities to serve a cause larger than one’s self.”

“The freedoms we have today must not be taken for granted, rather they should be protected and secured for generations to come,” he continued. “For all veterans around the globe, America sends you a heartfelt thank you for the price you have paid, for each and every one of us.”

After the speakers were finished, members of the Ohio National Guard lead a ceremony with local veterans to place wreaths by flags representing all six branches of the military and prisoners of war/MIA/KIA.

Then there was a 21 gun salute and “Taps” by the Symmes Valley Honor Guard which was made of members of VFW, American Legion and AMVETS posts.

The rains finally subsided as it was time to place wreaths. Within 10 minutes, the numerous members of the public, veterans, ROTC members and soldiers had placed the wreaths throughout Soldiers Circle.

Southers and Dalton got the idea six years ago after visiting Southers’ daughter in Washington D.C. and taking part in Wreaths Across America, putting wreaths on veterans’ graves in Arlington National Cemetery. They thought it was such a touching ceremony that they had to bring it to Lawrence County.

Dalton said that she and Southers are turning the mantle of the local Wreaths Across America to sisters, Laura Brown and Sally Ingles.

Community buys gifts for Angel Tree project AID — Families in the Symmes Valley school district will be having a... read more