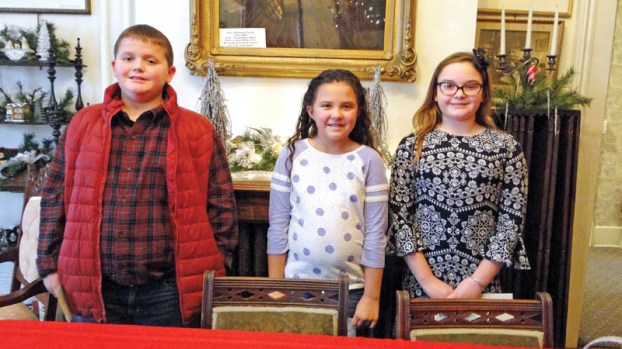 The top three entrants in the Lawrence County Museum’s annual essay contest were announced on Dec. 8.

Winners were hosted at a reception at the museum. The contest is open to all fourth graders from the county and, this year, there were 34 contestants.

Students write about a local history topic of their choosing.

Taking the top two places and getting awards of $50 and $25, were two Dawson-Bryant Elementary students, Evelyn Mader, who wrote about Homer Dawson and Curtis Bryant, and Madigrace Kuehne, who detailed the history of her family, the Melvins, in the area.

Their essays are reprinted as follows:

Many people each year go to war, but, for the community of Coal grove, there are two very important people who died serving our country. Their names were Homer Dawson and Curtis Bryant.

Homer Dawson was born Oct. 3, 1881. He came from a military family. His two uncles both served in the military. Homer Dawson attended public schools. He continued the family tradition and went to war. In August 1917, Homer was with 15 young men assigned from the O.N.G. (Ohio National Guard). The division was called the Rainbow Division, because it is made up of men from 26 different states. This division reached France in November 1917 to fight against the Germans. It was at this time that Homer lost his life on guard. He was killed by a German sniper. A small funeral was held on the battlefield and he was buried in France. However, Homer was later reburied in Coal grove. To this day, it is known that Homer died a hero.

Curtis Bryant was ranked as private in his division. This division was organized at Camp Sheridan in Montgomery, Alabama and it was made up out of men from the Ohio National Guard troops.

Eventually, men from other states would join and, at its height, the 37th division contained more than 27,000 men. As documented in an email from David W. Bedford, superintendent of the Meuse Argonne American Cemetery, he said, “If Curtis was with his unit the day he died, then, most certainly, he faced some of the toughest combat any American ever faced.” on Sept. 28, 1918,

Curtis was buried on a battlefield. When the war ended, they had a hard time finding his remains. When a note came to Mrs. Bryant, asking if she wanted her son to come home, she said “No.”

Still today, Cutis is in France, and it is obvious that Curtis died a hero.

In 1925, Coal Grove schools were named in honor of Homer Dawson and Curtis Bryant. Today, people are honoring these great men. Currently, the students and community of Coal Grove are raising money to sculpt a statue in honor of Dawson and Bryant. The statue is dedicated to all veterans like Homer and Curtis. The Student Soldier Statue will be placed in front of Bryant High School in September of 2018 in a memorial ceremony.

— Editor’s note: The statue has been dedicated since this essay was written.

My family, the Melvins, have a long history in Lawrence County. The first Melvin settled in what is now known as Coal Grove in 1805.

Jonathan Melvin was originally from Vermont. He was traveling through New York, when he caught smallpox. Once he was healthy, he traveled to Marietta, Ohio, where he met his wife, Nancy Ann Broom.

In early 1803, Jonathan and Nancy moved to Fort Washington, which is now known as Cincinnati.

They decided Fort Washington was not where they wanted to raise their family, so they headed downriver.

After pulling his family up the Ohio River in a pirogue that he made, Jonathan and Nancy stopped to rest across from what is now Ashland, Kentucky. While they were sleeping, a panther took  Sarah, their baby daughter. The family dog woke up and scared the panther, causing it to drop Sarah.

Fearful here might be other panthers, the Melvins traveled upriver to a home owned by Luke Kelley, where he met Col. Poague. Col Poague talked Jonathan and his family into staying in the area, even having his men build the family a small shack and tracking and killing the panther.

Around 1804 or 1805, Jonathan built a permanent home and used the shack as a shop for his copper trade. The area was perfect for copper, as it was rich in cedar trees. He died in 1851.

Sarah Melvin Hatcher survived the panther attack and died on July 4, 1891. It is said that, at the time of her death, scars from the panther’s curved teeth were still seen on Sarah’s right shoulder.

In researching the history of Lawrence County, Ohio, I found myself wondering about famous people from here in my hometown. I am a musician at heart. I especially love old country music. I enjoy listening to music, singing and making music. I guess this is why I found myself infatuated with the fact that we have a country music great from right here in Lawrence County.

Bobby Bare was born April 7, 1935, in Ironton and grew up in the Pedro area. His mother died when he was only five years old and his family was split up due to his father being too poor to provide for his children. Bobby Bare was then shifted around between relatives, including his grandmother, who lived in a little log home on Prickly Ash Road in Pedro. As a distraction to the inconveniences of his life, Bobby imagined about becoming a country singer, referring to the Grand ole Opry as his favorite influence. He went as far as making a homemade guitar out of a coffee can, a flat stick and screen wires.

As Bobby grew older, so did his love for music. In his teenage years, he put together a band and began playing for an early morning radio show. That gig turned into a bigger opportunity of a weekly radio broadcast. This inspired him to move to Los Angeles, California to make it big. His first hit came with his recording of “All American Boy” in 1958 under the name of Bill Parson, released in 1959 and making it to number three on the pop charts. He was drafted into the Army for a short period of time, but, afterwards, he began singing pop music and touring with famous singers like Roy Orbison and Bobby Darrin. He was recording records for several labels and his songs were being recorded by several artists, including Chubby Checker.

Eventually, Bobby turned back to his roots of country music. In 1962, he was signed to RCA Records by Chet Atkins and had a hit with “Shame on You” by the end of the year. The next year, he achieved his second single with the recording of “Detroit City” with Mel Tillis and Danny Dills. Between 1962 and 1983, Bobby Bare recorded nearly five dozen top 40 hits. He’s been referenced as the “Springsteen of Country Music” for his musical style and multi-genre attraction.

I can’t say that “everybody dies famous in a small town,” as Miranda Lambert has sang. But it sure is an honor to say Bobby Bare is a famous musical artist from our hometown. His dreams and imagination as a young boy in rural Lawrence County led to becoming a nationally-known musician.

Average bills to go up around $17 Ironton residents will see their city fees go up by about $17 per... read more