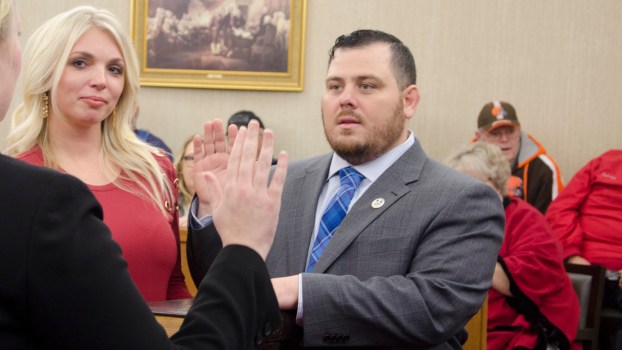 The Tribune/Heath Harrison Colton Copley, a Cabell-Huntington emergency room physician and member of the South Point school board, is sworn into his new job as Lawrence County commissioner on Thursday, by Common Pleas Judge-elect Christen Finley, as his wife Bethany looks on.

South Point School Board member Colton Copley was named to the seat of Bill Pratt, winning a vote by the Lawrence County Republican Party’s central committee on Thursday night.

As Pratt was a Republican, the decision to fill his term fell to his party, under Ohio law.

County chairman Jason Stephens said 63 members of the committee were in attendance at the special meeting, which took place in Lawrence County Common Pleas Judge Charles Cooper’s courtroom in Ironton.

In order to be considered for the position, a candidate had to be nominated by a committee member and have their nomination seconded.

In order to win the vote, a nominee had to get at least 32-vote majority of the 63 secret ballots cast, which Copley managed on the first vote.

Copley, 35, of South Point, works as an emergency room physician at Cabell-Huntington Hospital. He ran for the commission earlier this year, losing a close primary to incumbent Republican Freddie Hayes Jr. by less than two percent of the vote.

He was accompanied by his wife, Bethany, as he was sworn into the position by Lawrence County Common Pleas Judge-Elect Christen Finley at the end of the party’s meeting. Finley was set to be sworn in to her job on Friday.

Copley, while not certain he would win, said he had been talking to the community and had a good feeling going into the vote.

“I knew I had a lot of support out there,” he said of his win, and stated that he faced “a lot of good candidates” in the vote.

A family man and father of five, Copley listed his children by name as “five reasons” for wanting to work for the county’s future. He said he is eager to get to work on the issues the county faces, including longstanding ones, such as the need for a new jail and the budget, and he hoped to bring “outside the box thinking” to the job.

“There have been some things that have been a problem for 10 years,” he said. “It’s time to set down and get things done. I love our community and will try to best serve the people of Lawrence County.”

The son of Paul and Kelly Copley, he lost both of his parents in an auto accident in 2002. Copley said during the primary campaign that the support he and his brother had received from the community in the aftermath had inspired him to go into public service as a way to give back to the region.

“I learned what our county and community is about,” he told the Concerned Citizens of Burlington’s Meet the Candidates forum in March.

On joining the three-member commission, on which he will serve with his one-time primary rival Hayes, as well a member of the opposing party, Democrat DeAnna Holliday, Copley said he feels they will work well as a team.

He said he and Hayes have established a solid friendship since winning the primary and he has a good relationship with Holliday, reaching out to her during his run this year.

“I believe it will go well,” Copley said. “All three of us want to do what’s best for the county and we’ll all have the same end goal.”

Holliday offered well wishes to Copley when speaking to The Tribune Thursday night.

“I send my congratulations to Colton Copley,” she said. “I look forward to moving things in a progressive manner with him as our new commissioner.”

She said she has hope for the county, as it still mourns Pratt’s death.

“This whole chain of events has been sobering, and I’m still trying to get my head around it,” she said. “Colton’s a good person with good values and he’ll be good for the county.”

Copley, who will now step down from the school board,  said he was close to Pratt and his family and wanted to “make his memory proud and carry on some of the ideas and beliefs that he and I had talked about.”

He said, as long as he serves, Pratt will be there in spirit.

“As good of a commissioner as he was, he was an even better person,” Copley told the room during his presentation. “We are all in this together. Our party has been under tremendous stress these past two weeks, but we are strong and we will unite.”

This was the third time in the past decade that county Republicans had to vote to fill a vacancy on the commission. Pratt was appointed in 2011 after Stephens was elected county auditor and gave up his commission seat, while Hayes was appointed in 2012, following the death of Commissioner Paul Herrell.

Lucas was also a candidate in both of those votes by the central committee.

“It feels like déjà vu all over again,” he said, when opening his pitch to the room.

County Republicans had until 45 days after Pratt’s death to fill the seat. Stephens said one of the reasons they decided to vote before the holiday was to give the new commissioner time to prepare for the commission’s next meeting, which will be in early January.

“This will give him time to get up to speed and be ready,” he said.