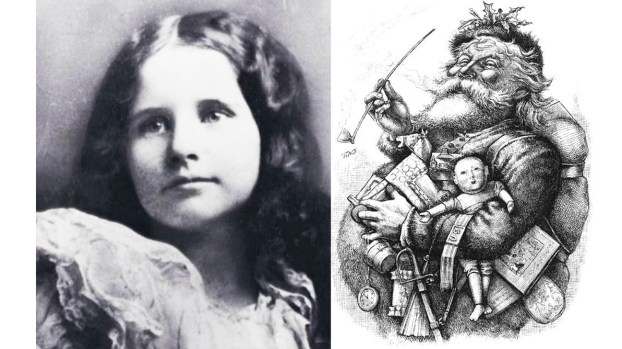 LEFT: Virginia O’Hanlon, 8, of Manhattan, wrote to the New York Sun in 1897, asking if Santa Claus was real. The resulting editorial reply has become a holiday classic and the most published editorial in the English language.; RIGHT: Santa Claus, 1881, as depicted by cartoonist Thomas Nast, whose illustrations greatly shaped the modern view of the Christmas figure

Yes, Virginia, there is a Santa Claus

The resulting editorial reply was written by editor and publisher Francis Pharcellus Church, a former Civil War correspondent who specialized in spiritual topics.

It was printed on Sept. 21 of that year and has since become a part of American holiday lore and is the most reprinted of any English-language editorial.
Each Christmas, The Tribune is happy to reprint the piece in its entirety.

Dear Editor,
I am 8 years old.
Some of my little friends say there is no Santa Claus.
Papa says, ‘If you see it in THE SUN it’s so.’
Please tell me the truth; is there a Santa Claus?
Virginia O’Hanlon
115 W. 95th Street

Virginia, your little friends are wrong. They have been affected by the skepticism of a skeptical age. They do not believe except they see. They think that nothing can be which is not comprehensible by their little minds. All minds, Virginia, whether they be men’s or children’s, are little. In this great universe of ours man is a mere insect, an ant, in his intellect, as compared with the boundless world about him, as measured by the intelligence capable of grasping the whole of truth and knowledge.

Not believe in Santa Claus! You might as well not believe in fairies! You might get your papa to hire men to watch in all the chimneys on Christmas Eve to catch Santa Claus, but even if they did not see Santa Claus coming down, what would that prove? Nobody sees Santa Claus, but that is no sign that there is no Santa Claus. The most real things in the world are those that neither children nor men can see. Did you ever see fairies dancing on the lawn? Of course not, but that’s no proof that they are not there. Nobody can conceive or imagine all the wonders there are unseen and unseeable in the world.

O’Hanlon died in 1971 at age of 81. She continued to receive mail about the editorial throughout her life. She often told friends and family that she had done nothing special in asking the question, but that Church’s “beautiful” response had a major impact on her life. “The older I grow, the more I realize what a perfect philosophy it is for life,” she said.

When needing words to get in the Christmas spirit, it helps when your father is one of the most renowned... read more