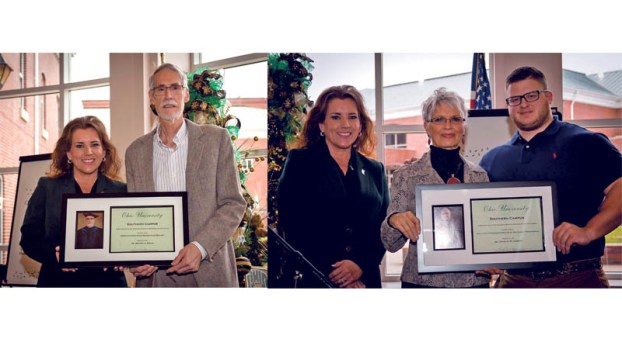 Millay, Jarrett noted for their service to university

Two members of Ohio University Southern faculty have attained emeritus status for their meritorious service to the university.

OUS dean Nicole Pennington recognized the work of Dr. Michael Millay, Ph.D., a new retiree of the campus and Charles Jarrett, Ph.D., who passed away in early 2018.

“Dr. Millay and Dr. Jarrett touched the lives of thousands of students over the past three decades at Ohio Southern,” said Pennington. “The quality of education on our campus has been enhanced by the work of both these scholars.”

Emeritus status is conferred upon retired faculty based on their length of service, quality of teaching and research or performance in administrative position, overall contribution to the university and service to society beyond the university community.

Millay served at OUS for 27 years as an associate professor of biology and plant biology before his retirement this year. During his tenure, he stressed to his students the importance of appreciation for the natural environment. Millay maintained a 270-gallon saltwater aquarium for years as a teaching tool and, upon his retirement, encouraged donation of the aquarium to the Tri-State STEM+M School for the next generation to learn about sea life.

During his career, Millay has published in scientific journals and his work has been cited by others more than 1,000 times. He remains a member of disciplinary organizations and continues to research in the area of botany. He also served on numerous committees for Southern and for OHIO Regional Higher Education.

The title of Associate Professor Emeritus of Sociology, Ohio University Southern was posthumously conferred on Dr. Jarrett, who was remembered as a valued professor and dedicated researcher. He served OUS for 32 years before his death in March.

His work in the classroom challenged students through inquiry-based learning techniques. He designed courses around his scholarly research on Gullah culture on Hilton Head Island, studying its diversity and cultural enrichment. The Gullah are descendents of formerly enslaved African-Americans living along the coastal regions of South Carolina and northern Florida

Jarrett served on numerous campus and university committees including the Council for Diversity and Inclusion. He published three short stories with Joggling Board Press, Inc., which were broadcast by Storyboard America on South Carolina Public Radio and National Public Radio. In 2017, he was awarded the OHIO Regional Higher Education Outstanding Professor Award. Jarrett was also known for music, playing the drums for nearly all of his life in bands including the Mighty Mojos and his most recent band, Dr. J’s All Star Band.

STEPS of Recovery has been in Ironton for around a year and a half, and Dr. Nicholas Landry said he... read more