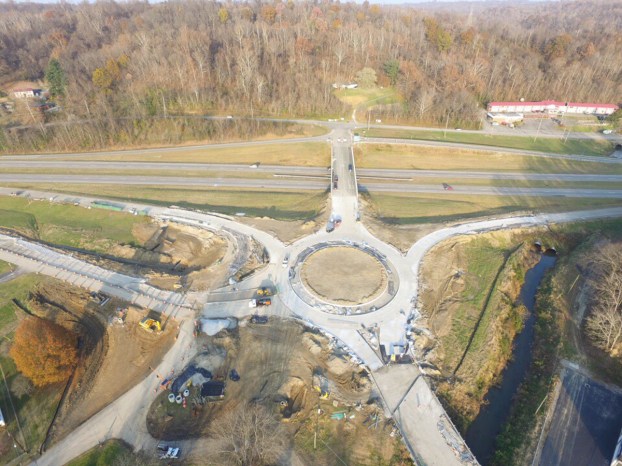 Submitted photo Construction on the roundabout at the Solida Road interchange in South Point is seen in this early December photo. County Engineer Patrick Leighty says he expects the project to be open to traffic on Friday.

Engineer says all lanes should to be ready for traffic

SOUTH POINT — It’s been a much-anticipated day for residents of South Point, and the roundabout at the Solida Road interchange is about to open.

Lawrence County Engineer Patrick Leighty said he anticipates all lanes of traffic will be open by 11:59 p.m. on Friday.

“They should be finished with safety features and there will still be shoulder and berm work to do, but it should be open,” he said.

Work began in the fall on the project at the intersection of Solida Road and Commerce Drive, just off the interchange with U.S. 52.

Designed to accommodate larger amounts of traffic as The Point industrial park and other nearby businesses expand, the project closed the interchange and caused traffic to be rerouted along County Road 1.

Construction was funded by the federal government and the Job and Commerce division of the Ohio Department of Transportation and the construction has been administered by the county engineer’s office.

The project initially had a completion date of Dec. 31, but had encountered some weather issues.

He said he has been down to the site and spoken with workers daily and that he has been told there is guardrail work and other things to be done by Friday.

“I’m told each will take one day,” he said of the remaining projects. “I’m excited and hope all goes well.”

SOUTH POINT — South Point Local Schools would like to announce the addition of both middle school softball and middle... read more