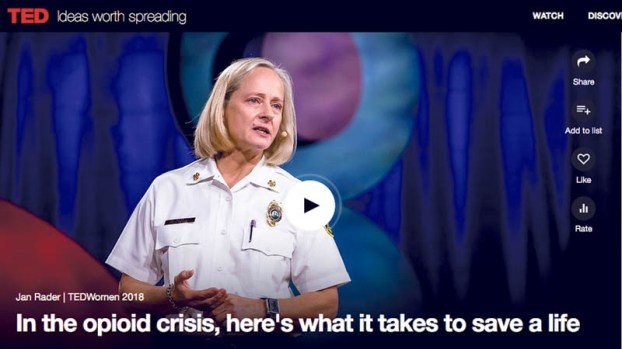 Huntington Fire Chief Jan Rader was featured on CBS This Morning on her November TED Talk “In The Opioid Crisis, Here’s What It Takes To Save A Life.”

Talking about an epidemic

Jan Rader continues to be a spokesperson for the fight against the opioid crisis that plagues the Tri-State.

The Huntington fire chief was on CBS This Morning on Wednesday to talk about her TED Talk, which was filmed in November and has gotten over 56,000 views so far.

The TED Talks started in 1984, covering mainly how technology has expanded over the years to cover science, cultural and entertainment topics. Speakers are invited to tell about their area of expertise in less than 18 minutes at a conference and the talks are filmed and distributed under the slogan of “ideas worth spreading.” So far, 2,800 talks have been posted online and have gotten a billion views.

In her TED Talk, she tells how she has been a firefighter for 24 years and in 2008, she earned her Associate Degree in Nursing from Ohio University Southern after it became clear to her that the next big threat was not a “one and done emergency where you can ride in like the cavalry” but the lethal problem of opioid addiction.

Rader said that first responders have had to redefine their job to be less like the cavalry and do more and save a life, but help to rebuild that life.

She said that what they are dealing with is a brain disorder that changes the way a person thinks and convinces them they don’t have a problem.

To help those addicted to drugs, Rader came up with the concept of a Quick Response Team, which helps abusers get in contact with recovery coaches and ProAct, a specialty addiction clinic. She also helped establish self-care programs to help first responders deal with fatigue and depression.

She said that currently their overdoses are down 40 percent and the number of overdose deaths is down 50 percent.

“This epidemic is far from over,” she cautioned as the audience applauded those numbers. “In Huntington, we are showing the rest of the country … that there is hope in this epidemic.”

Rader graduated from Ironton High School in 1983 and then went to Marshall University for about a year and half before going into the jewelry business for 13 years. After a woman had a heart attack in front of the jewelry store, Rader realized she didn’t know CPR and had to call 911 for help.

She took a CPR class and an EMT basic class and then started to apply to be a firefighter in Washington, D.C. but her brother, a pastor in Huntington at the time, told her about a job opening in the city. She passed the test and was hired in 1994. She went on to take a paramedic class and worked as a paramedic with the Ceredo Volunteer Fire Department. Then she went to Ohio University Southern and became a nurse. On her days off from the fire department, she would work as a nurse in the ER at Cabell-Huntington Hospital.

Besides her job as the Huntington fire chief, Rader has become a national spokesperson in the opioid crisis after appearing in the Netflix documentary, Heroin(e), which was nominated for an Oscar last year in the Best Documentary Short category. Although the film didn’t win, Rader got to the Oscars ceremony and was probably the only person in the red carpet history to wear their uniform jacket over a dress.

“I’m shocked, to be honest with you,” she said. “Never would I have ever imagined being chosen for such an achievement. It’s not something you ever think about. Heck, I didn’t even think I would be a fire chief. It has been very humbling.”

Engineer says all lanes should to be ready for traffic SOUTH POINT — It’s been a much-anticipated day for residents... read more