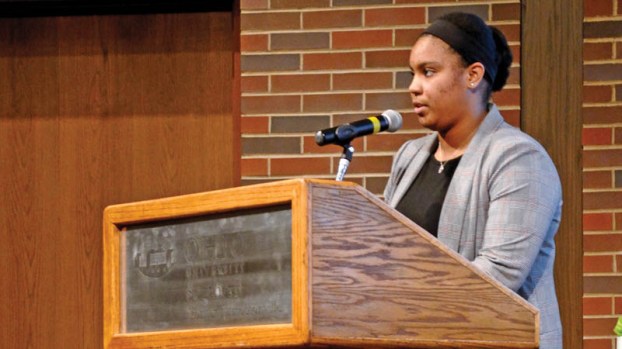 As they have done for more than two decades, Ohio University Southern paid tribute on Thursday to the legacy of Dr. Martin Luther King Jr.

The annual Community Celebration, held in Bowman Auditorium going into the holiday weekend, brought together a diverse lineup of speakers who spoke of how the civil rights leader’s work had impacted their lives.

Ironton Mayor Katrina Keith said that, as the city’s first female mayor, she could relate to King’s perspective from that position.

“I had to overcome my own thought processes and people’s perception of what a woman can do,” she said. “I can relate to that.”

Keith said that everyone in the region could overcome the perceptions others might have about a rural area and spoke of the area’s assets.

“We are somebody right here in Lawrence County,” she said. “If I can be a leader, you can.”
Lawrence County Commissioner DeAnna Holliday said King had “changed social discourse as a whole.”

“He empowers people to this day to speak up and stand for what they believe in,” she said.
She said that King had taught her not to “let labels define us” and that he had “in a sense, given me permission to use my voice.”

She spoke of the need for better communication in public work.

She said, in her early time on the commission, she had been disappointed by disagreements, but the three were able to overcome “the lack of unity,” and that “three people with different backgrounds” were able to come together for the good of the county.”

“We set the climate for progress,” she said.

Also taking the podium was Dr. Asif Razak, an Ashland chiropractor, who spoke of his parents’ move to the Tri-State from Pakistan.

A 1998 graduate of Paul Blazer High, he said he was made to feel welcome in his hometown of Ashland, despite a different background and being aware of that.

“Our Christmases were different, the food we ate was different,” he said. “But the best thing is, nobody made me feel different.”

He said those of differing backgrounds often seek ways to feel they belong, whether it was through extracurricular activities, or, in his case, forming a diversity club at the school.

He began his practice, in part, due to the opioid epidemic and the overprescription of pain medication in the area.

“My dream is to leave the Tri-State in better condition than when I got here,” he said.

He urged the audience to “embrace diversity and show love,” adding that he was comfortable with both his Pakistani background and his upbringing in the area, including the accent he said he had developed.

“I’m proud to be a hillbilly Pakistani,” he said.

The school also announced the winners of this year’s MLK essay contest, which was open to all high and middle school students and received 50 entries this year.

Ironton Middle won all three spots in their category, with first place going to Anna Davis, followed by Laikyn Conroy and Cami Stevens.

At the high school level, Katherine Scott, of Dawson-Bryant, took the top honor, followed by Tabitha Caskey and Jillian Aylsworth, of South Point.