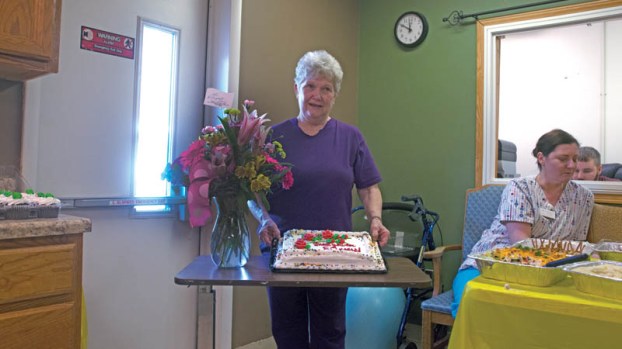 Mary Lou Jenkins shows off the cake and flowers her co-workers at Crystal Care Center of Coal Grove got her on Tuesday to celebrate her working at the facility for 50 years.

She wasn’t happy but she wasn’t mad either.

“You weren’t supposed to,” she told her co-workers. “I didn’t want a fuss. I don’t party and I don’t like parties.”

But her co-workers weren’t about to let her golden anniversary slide.

Carrie McClellan, the marketing, admissions and social services manager, said they still wanted to recognize her and her achievement.

“We knew she would be upset but we also knew that she’d get over it,” McClellan said with a laugh. “We decided to do it whether she liked it or not. We just wanted her to know that we love and care for her.”

Jenkins, a Deering resident, began working at the facility, then known as Sunset Nursing Center.

“I started out in housekeeping then I took the training to be a nurse’s aide,” Jenkins said. “I don’t know how long I was a nurse’s aide but I got too old to lug and tug and so I went back to housekeeping, kitchen and laundry. I’ve done it all, just about.”

When asked if she ever thought about retiring, Jenkins said she actually retired about 15 years ago but came back to work.

“I just missed this place and I was used to working,” she said, with a laugh. “And I was wondering what everyone was doing up here.

As to why she has worked there for 50 years, it was simple.

“It’s just a good place to work,” Jenkins said. “Everybody gets along. It’s a really nice place.”

“We are really honored to have a worker like her,” she said. “She goes above and beyond for us and we wanted to have a party for her. We wanted to let the community know there are always great workers like her out there and we appreciate her.”

Mayor, commissioner among speakers As they have done for more than two decades, Ohio University Southern paid tribute on Thursday... read more