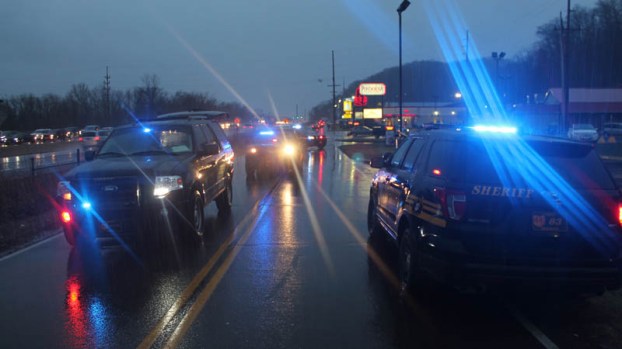 Law enforcement blocked off the area outside of the South Point McDonald's early Wednesday evening following a domestic violence-related shooting. The suspect, Belinda S. Adkins, turned herself in on Friday and was arrested in Burlington.

Adkins turned herself into sheriff’s office

After two days on the run, murder suspect Belinda Adkins turned herself in to the Lawrence County Sheriff’s Office on Friday afternoon.

Authorities had been searching for Adkins as a possible suspect in the death of Joshua C. Jones. He was shot at the South Point McDonald’s late Wednesday afternoon and later died at a local hospital. A female suspect was seen leaving the lot in a white sedan.

On Thursday, a warrant for murder, a felony of the first-degree, was issued the 41-year-old Adkins, of South Point. On Thursday afternoon, her 2008 white Chevy Malibu was found on 10th Street in Ironton.

The search for Adkins came to an end on Friday afternoon after she went to an acquaintance’s house on Cedar Street in Burlington and asked them to call the sheriff’s office so she could turn herself in.

Sheriff’s detectives working the case were only a couple of blocks away and arrived at the Cedar Street location to find Adkins standing at the end of the driveway. She was arrested without incident.

Lawrence County Sheriff Jeff Lawless said that detectives had been following up many leads as to Adkins’ location and that even the U.S. Marshals were in the area looking for her.

“One of the things we will be looking into is to whether people were giving her aid. But she was alone at the time of her arrest,” he said. “I do think she was tired of running. The heat was really on. We had the U.S. Marshals out. We had our guys out and running to every place someone gave us as a possible location. We were knocking on doors. The heat was on and I think she was ready to give up.”

Lawless said that they were afraid Adkins would leave the area and it would be even harder to find.

“That’s why we used every resource we could,” he said.

Adkins was taken to the Lawrence County Jail to be interviewed by detectives.

She will be arraigned in the Lawrence County Municipal Court at 9 a.m. on Monday.