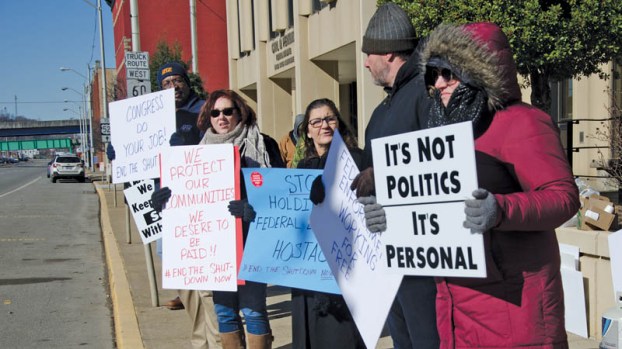 Federal workers from eastern Kentucky took part in a picket outside the federal building in Ashland on Friday, urging leaders in Washington, D.C. to end the federal shutdown.

Workers picket in Ashland regarding costs of federal furloughs

WASHINGTON — Leaders in the nation’s capital announced a deal on Friday that would re-open the federal government for three weeks, bringing an end to the current shutdown.
Congress is expected to quickly pass legislation that would temporarily reopen the government after President Donald Trump agreed to a deal to end the record 35-day partial shutdown.

The shutdown began on Dec. 22 and continued as Trump said he would not reopen the government unless funding is secured for a border wall with Mexico.

Trump has requested $5 billion in funding for construction of the wall, which was one of his signature issues during the 2016 presidential campaign.

Democrats in Congress, who took control of the House of Representatives after the 2018 midterm elections, have said they will oppose funding the wall.

The president said on Friday that he will sign legislation to reopen shuttered government departments for three weeks — until Feb. 15.

The Senate was set to act first, with the House following later Friday, according to lawmakers and aides on Capitol Hill.

The legislation, set to be passed by Congress, will include back pay for some 800,000 federal workers who’ve gone without their salaries during the shutdown. The shutdown has disrupted services and created hardship for many workers.

Trump spoke at the White House on Friday as intensifying delays at some of the nation’s busiest airports and widespread disruptions brought new urgency to efforts to break the impasse.

Even as Trump backs down and agrees to a short-term deal that reopens the government, he isn’t giving up on his push for a U.S.-Mexico border wall.

The agreement calls for a bipartisan group to discuss the matter of funding the U.S. Department of Homeland Security.

Trump said he could shut down the government again or use his presidential powers to address the border issue if he doesn’t get what he’s calling a “fair deal.”

The effects of the shutdown could be seen locally on Friday, as a group of about 30 furloughed workers took to the streets in Ashland and conducted an informational picket on its effects.

According to Rick Brewer, president of American Federation of Government Employees Local 1286 in Ashland, the group, which numbered about 30, represented those who work in the Social Security Administration, the teachers union, the carpenters union and others.

“We want them to end the shutdown,” he said. “It’s caused a hardship on people at these institutions.

He said the federal workers have been without pay for 35 days and have now missed two paychecks.

Brewer said his group blames “both sides” for the shutdown.

“The government is using us a political pawns,” he said. “There are issues with people putting food on their table, buying gas, medicine for their kids and families.”

Jerry Jackson, president of the union representing workers at the United States Penitentiary, Big Sandy in Inez, Kentucky, said workers have been required to show up for the job without pay.

He thanked those who supported them, which could be heard in the numerous honks from cars passing by on the cold morning.

“We’re done with politics,” he said. “This is not our game.”

The group had intended to remain on the street until 5 p.m., but were packing up early as news came of the deal in Washington.

“We’re glad it’s happening,” Brian Tague, legislative coordinator for AFGE 1286, said, adding that they will get back pay and another paycheck in the three weeks covered by the deal.

Though he remained cautious.

“After the third week, if they don’t pass a budget, we’re back in the same boat,” he said. “If they would just pass an October-to-October budget, like they’re supposed to, we wouldn’t be in this.”

Tague, who works in corrections, said he has been in government employment for 18 years and this is the third shutdown he had endured.

“We’re happy this has happened,” he said of the deal. “But until they pass a budget, I’m still going to be uncomfortable.”

The Associated Press contributed to this story