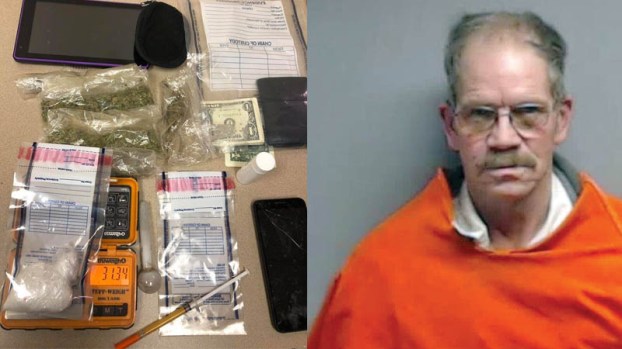 Evidence collected by the Proctorville Police Department after they arrested Douglas Radcliff, of Willow Wood, on a drug charge on Saturday.

PROCTORVILLE — The Proctorville Police Department made a drug bust at a gas station over the weekend, arresting a 61-year-old man for selling methamphetamine in the parking lot.

On Saturday morning, an employee of the Speedway gas station in Proctorville called the police after noting that a car had been coming to the parking lot for several days and people would briefly come up to the car and then leave. That led the employee to believe drug deals were being made.

When the car arrived on the lot again on Saturday, Patrolman Steven Woodyard approached the vehicle and asked the driver to exit the vehicle so he could talk to him.

During a pat down, the officer felt a large bulge in the man’s jacket.

When asked what it was, the man said he didn’t know because it wasn’t his jacket.

Woodyard got permission to see what it was and pulled out a baggie of crystal methamphetamine, which the driver claimed was for his personal use.

The officer called for additional officers on the scene while he searched the car. Chesapeake Police Chief Randy Thompson and a Lawrence County Sheriff’s deputy arrived to assist. After the car was searched, an officer from the Lawrence County Drug and Major Crimes Task Force was called in to assist in the investigation.

During a search of the car, more methamphetamine was found along with several baggies of marijuana, a box containing baggies and scales for weighing and a syringe with an unidentified substance in it.

The driver of the car, Douglas Radcliff, 61, of Willow Wood was arrested and charged with trafficking in methamphetamine, a second-degree felony.

Video footage from the gas station is being reviewed to see if any of the people that bought drugs can be identified.

Proctorville Police Chief Bill Murphy said that the department appreciates the help of the public when they see suspected drug activity and that his officer did a good job.