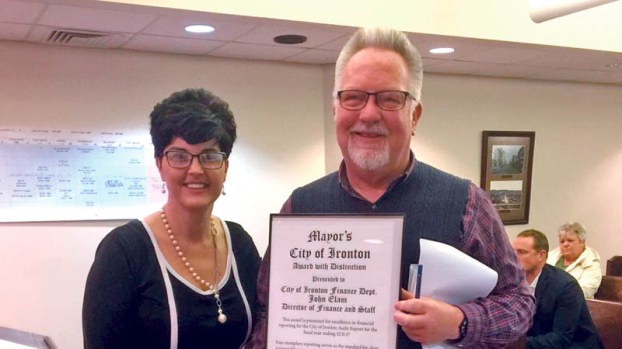 2017 audit was best report in years

At Thursday’s Ironton City Council meeting, Mayor Katrina Keith took a moment of her time before the assembly to recognize the city’s Finance Department for its hard work.

She presented Finance Director John Elam and the Finance Department with a Mayor’s Award of Distinction for excellence in financial reporting for the city’s 2017 financial audit.

Elam said “on behalf of the Finance Department, I was very appreciative to receive that award. We strive, everyday, to be fiscally responsible and good stewards of the taxpayers’ dollars.”

On Dec. 27, the Ohio State Auditor sent a positive report for the city’s 2017 financial audit, which was done in accordance with Government Auditing Standards and considered the city’s internal control over financial reporting and the state’s tests of its compliance with certain provisions of laws, regulations, contracts and grant agreements and other matters.

“It is nice to have our efforts recognized and we try to maintain the gold standard for reporting excellence,” Elam said. “It feels good to be recognized for our work.”

Elam has joked that he has become quite proficient at using the word “no,” when departments asked for funds. He said that it is part of being fiscally conservative.

Keith said at the Dec. 27 meeting that it was the first time in 15 years that the city had gotten that good of an audit. Most audits done by the state auditors find some type of item that needs correcting and recommends a course of action to correct it.

To read the full 85 page report, go to the Ohio Auditor of State’s website and search for Ironton under audits.

Phases 4, 5 will be in middle, downtown Ironton On Thursday, the Ironton City Council found out the city is... read more