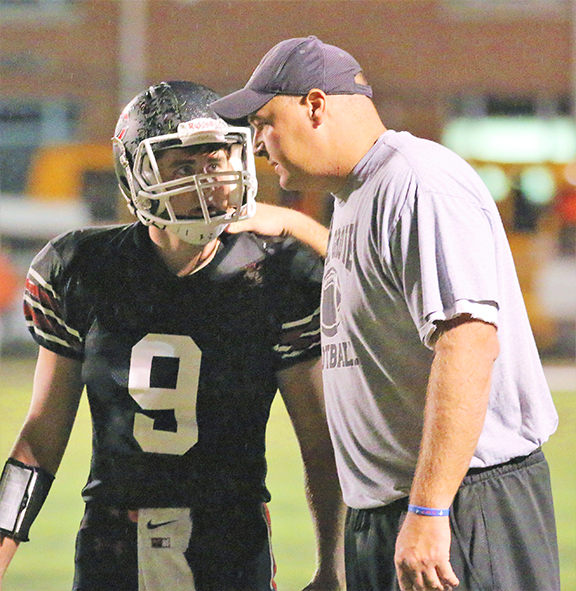 Jay Lucas (right) talks with a Coal Grove player when he was an assistant coach for the Hornets. Lucas has been hired as the new Coal Grove head football coach. (Photo Courtesy of Tim Gearhart)

COAL GROVE — Jay Lucas is coming home.
The former Coal Grove Hornets player and assistant football coach is returning to his alma mater, only this time he will be the head football coach after being hired by the Dawson-Bryant school board by a 4-1 vote on Monday.
Lucas replaces Evan Ferguson who accepted a similar position with Boyd County, Ky. Lucas is the Hornets fourth head coach in six years.
“I feel thankful for the opportunity. I feel blessed that God found a way to get me back home,” Lucas said.
Lucas spent the past two seasons as the head coach of the Wellston Golden Rockets. He posted a 5-5 record his first season and then 3-7 last season with a young team hampered by injuries.
“We started eight sophomores and the kids played hard. We just didn’t have the experience. We played four teams playoff teams and two teams that are two divisions bigger.”
However, his team numbers increased to more than 50 players each year.
Lucas served as an assistant to his father — Ohio High School Football Coaches Association Hall of Famer Dave Lucas — for 13 years at Coal Grove and an additional three seasons as his assistant at Wellston.
He also served a year under Ron Hinton at Chillicothe.
“I love coaching and I love working with the kids. Wellston was a great place. The administration and community were great to work with. But Coal Grove is home. It’s a part of me. I grew up here. It’s just a great place that I really like. My friends and my family are here,” said Lucas.
Besides football, Lucas has also been the head basketball and track coach at Coal Grove. He guided the Hornets to two sectional championships in basketball and won six Ohio Valley Conference track titles and five district championships.
Besides football, Lucas will also handle the weightlifting program. However, he is open to helping any program if asked.
“I’m more than willing to help as much as possible. I want all our programs to be successful, not just football,” said Lucas.
Coal Grove is coming off a 4-6 season after an 11-2 campaign the previous year. Lucas plans to continue the same system and philosophies that he has used while coaching with his father and at Wellston.
“Offensively, we’ll have a power running game. I’d like to marry that with the spread to expand and contract the defense,” said Lucas.
“Defensively, we’ll be in a base 50 and try to utilize execution and technique. A lot of teams now are running the spread offense, so you have to adjust. We’re going to run the ball but we’ll throw the ball, too, and play aggressive defense. We’ve always relied on our line of scrimmage to win ball games.”

Jim Walker jim.walker@irontontribune.com It’ll be here versus there. The annual Tackett’s Body Shop Shootout at Ironton High School has been... read more