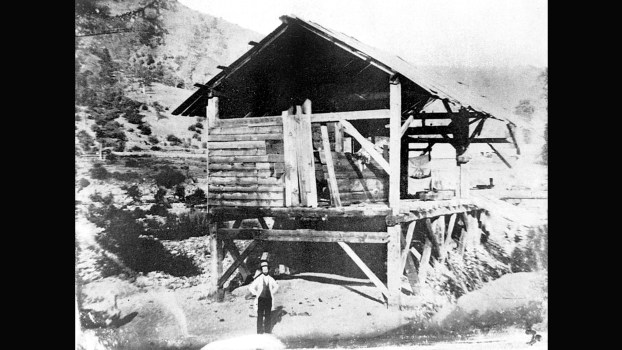 Public domain John Sutter’s sawmill, seen in this 1850 photo, on the American River in California was under construction when gold was discovered in California in 1848. Once the gold rush was on, the mill was never completed.

California belonged to Spain until 1822, when it became a province of Mexico. The Spanish Franciscan fathers had built 21 missions along the length of California by 1823 to convert the Indians to Christianity. The Indians worked the cattle ranches and the fathers exported hides and tallow to New England.

The Russians had built Fort Ross in California in 1812. Both England and Russia were involved in the fur trade in northern California. Americans were welcomed there by Spaniards and Mexicans as early as 1840. As a result of the Mexican War (1846-48), Mexico ceded today’s California, most of New Mexico and Arizona, Nevada, Utah and parts of Colorado and Wyoming to the United States on Feb. 2, 1848 — eight days after gold was found on the American River.

In 1849, most of the world would know of California and the Gold Rush saw thousands go there.

John Augustus Sutter was born in Kandern, Baden, near the Swiss border in 1803. He met Annette Duebeld in Aaberg, Switzerland. He did not marry her until the day before the birth of their first child. With a wife and son to support, Sutter turned to his wealthy mother-in-law and suppliers to finance his dry goods store.

Facing bankruptcy and possibly prison, Sutter left his wife and children and came to make his fortune in America. Arriving in New York, Sutter was told his best opportunities were to be found on the western frontier.

Not wanting anyone to know about his European bankruptcy, he made up a false history about his past. In all his movements, he took a trunk with military uniform parts in it and introduced himself as “Captain Sutter.” His falsehood explained that he had been a captain in the Swiss Guard of King Charles X of France.

After economic ventures in Missouri, Santa Fe, Hawaii, Alaska, Monterey (the Mexican capital of California) and San Francisco Bay, Sutter still dreamed of establishing his own empire in the interior of Mexican-held California.

At each stop, Sutter told of his military service and always impressed military officials, government personnel, merchants and financiers who backed him and advanced him credit. His letters of introduction and recommendation always opened doors and pocketbooks.

The Mexican governor of California approved of Sutter’s proposed colony. Some people could not understand why he wanted his colony so far removed from civilization. Sutter’s three schooners sailed up the Sacramento River to the junction of the American River.

In the summer of 1839, at the age of 36, Sutter began to plant his colony. The “captain” would name his colony New Helvetia (New Switzerland).

Hundreds of Indians labored building the colony. Sutter paid the Indians with tin cans, stamped with stars to be used at the colony’s store. All Americans who were skilled workers were always welcomed.

Sutter reported to the Mexican governor at Monterey on the progress of the colony. The governor of California, deeply impressed by Sutter’s progress report, gave him a land grant of 50 square miles (50,000 acres) in the Sacramento valley. Sutter was told to prevent Americans from settling in the valley, but he welcomed them with open arms.

At his colony, Sutter built a fort with walls 18 feet high and two and a half feet thick. With Indian recruits, he formed a uniformed “Army of New Switzerland”

In 1847, after the United States took possession of California, Sutter owned 12,000 cattle, 15,000 sheep, 2,000 horses and mules and 10,000 hogs. He expected a harvest of 40,000 bushels of wheat. He quickly built a grist mill to produce flour. He wanted to establish a sawmill to sell lumber to residents who came into the valley.

He hired James G. Marshall, a carpenter from New Jersey, to build the sawmill. The site of it was called Coloma and was 36 miles northeast of what would become Sacramento. Sutter’s family was still far removed in Europe.

Sutter and Marshall formed a partnership to build and operate the sawmill on the south fork of the American River. The land for the sawmill was said to belong to no one, because the rights of colonial Indians there were ignored. The race was laid out to carry water over the mill wheel. With the millrace dug, the river was turned into the millrace and mud sand and gravel would collect at its lower bed.

On Monday, Jan. 24, 1848, at 7:30 a.m., James Marshall was inspecting the stream and millrace. Six inches beneath the water, he saw some small, glittering fragments — gold!

Various tests were performed to see if the metal was gold. Mrs. Jenny Wimmer, the contrary cook for the mill crew, put the metal in her soap kettle and boiled it with lye and baking soda. The cooking did not change the metal.

Sutter came to the sawmill site, riding his beloved mule “Katy.” He carried his walking stick and brought jackknives for his mill employees to pick gold. He asked Marshall and the work crew to keep the discovery a secret.

One of the work crew, Henry Bigler, became the first California prospector. Due to “gold fever,” the sawmill was never finished. Sutter negotiated with the local Indians for the site where gold was found and leased it for three years. Within six weeks, all of his workers had deserted Sutter’s stores, farms and ranches and headed for the gold fields.

Sam Brannon, a Mormon elder who would be excommunicated from the Church of Jesus Christ of Latter-Day Saints, decided to visit Coloma and see for himself if gold was there. He appeared on the streets of San Francisco, waving a quinine bottle full of gold dist and shouting, “Gold! Gold! Gold from the American River!”

Brannon built a new store next to the sawmill and bought every pick, shovel and pan he could find. Now the discovery of gold spread far and wide.

The population of San Francisco was reduced from 812 to 12 people. Brannon would be responsible for the forthcoming gold rush. Eight hundred ships were anchored in San Francisco Bay and deserted by their crews. The race to find gold in California was the greatest movement of human beings since the Crusades to the Holy Land in 1096. People came from North and South America, Europe, Asia, Africa and Australia. They would be called Argonauts or “forty-niners.”

Most took the overland route across the Great Plains, but these people had to get through the mountain passes before snowfall. Other gold seekers made the six-to-eight month journey by sea around Cape Horn. The last way to get there was across the Isthmus of Panama on horseback, mule back or “piggyback,” being carried on the backs of Indians, and next by boat up the pacific coast to Sacramento.

Disease and death claimed many of the “forty-niners” before they reached the “gold diggings.” 35,000 reached their destination in 1849. By 1851, 80,000 prospectors had invaded New Switzerland.

It is estimated that there were 500 communities of gold seekers and each site had some fascinating facts about the name origin.

At first, if a miner wanted to begin a dig in a new area, it should be started within 15 feet of one already in operation. Sometimes, a divining rod was used to determine a new dig.

The standard tools of the “forty-niner’ were the pick, shovel, and iron pan. There was not a single pan to be had in San Francisco — Brannon had bought them all and taken them to his new store at Coloma.

The iron pan originally sold for $0.20. Bannon sold them for a half ounce to an ounce of gold dust or from $8 to $16 a piece. His shovels might cost $125 a piece. Why stand in cold water and the hot sun to dig when you could get rich instantly selling gold seekers liquor, food, clothing and mining equipment?

The “urban forty-niner” was a person who avoided the actual diggings and worked out of general store, saloon, real estate tent or dance hall. This type became rich very soon, because of the prices he could command: Boots cost $100; $20 for a pick; bread was $0.50 a loaf; an apple was $0.50; eggs were $1 a piece; a dose of medicine was three ounces of gold; a drink of whisky was a pinch of gold dust; a pound of coffee was $4; flour was $0.40 a pound or $50 for a barrel; and cats, to police the many rats in San Francisco, sold for $10 a piece.

Sutter was helpless as the hordes of miners overran New Helvetia. He retreated into the wilderness, drank heavily and began seducing Indian women.

His partner, Marshall, the discoverer of gold in California, saw “forty-niners” overrun his land also.

In 1872, California voted Marshall a pension of $100 a month, but discontinued it in 1878. Marshall had wandered into the state Legislature drunk and behaved very poorly. His estate, at his death in 1885, was valued at $218.82, but there was not enough money on hand for a proper coffin.

Sutter’s wife and children came to California in 1849. He constantly sought legal action to retain his vast land holdings. Congress, each year, refused to compensate him for his losses. The state of California awarded Sutter $250 a month from 1864-1878. He died in 1880.

There were few laundresses in the gold camps. Wealthy San Francisco men were in the habit of sending their best shirts to Hong Kong or Hawaii. It cost these men $12 to have 12 shirts done. Wah Lee, a Chinese “forty-niner,” opened a laundry in San Francisco in 1851.

Lee did not charge more for washing and ironing their shirts – He charged $5 for a dozen. He died a rich man, without using a pick, shovel or iron pan.

By 1852, the population of California was 250,000 and, by that year’s end, over $200 million worth of gold had been mined. Marshall and Sutter died poverty-stricken.