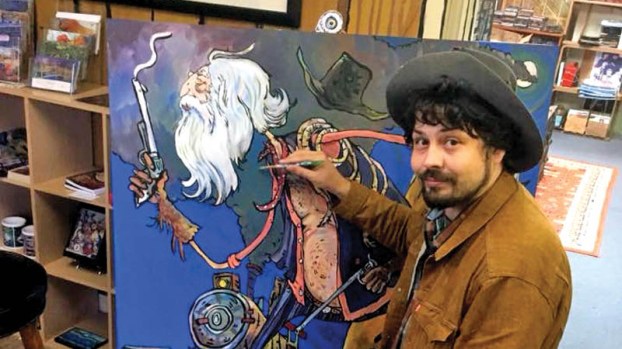 Portsmouth artist Charlie Haskins and Wheelersburg songwriter Josiah Whitely exchanged works for a year and half, inspiring creations in response to each other. Haskins has copies of “Moon Songs” available at his shop, “Haskins House,” located at 534 2nd St. in Portsmouth

PORTSMOUTH — A recently-released book showcases the collaboration between a local artist and musicians.

“Moon Songs,” by Charlie Haskins and Josiah Whitley, made it debut a few months ago on Small Business Saturday and has been available for sale through the artist’s shop in Portsmouth and online.

Haskins, 33, has acquired a reputation locally for his illustrative acrylic work, which has been featured in several exhibitions.

He said that he met Whitley, who lives in Wheelersburg, when he came into his store and was browsing through CDs.

“He was picking up a few artists that I liked — Bob Dylan, Tom Waits — singer-songwriters,” Haskins said. “I found out that he played, too, and we shared a similar thread.”

Haskins said that, over the course of a year and a half, he and Whitley began exchanging works once a month.

Haskins would show Whitley a painting and then he would composed a song in response.

And, vice versa, Whitley would play a song and Haskins would create a visual image.

The 40-page, full color book, and its accompanying CD of Whitley’s music, deals with subject matter, such as the man in the moon, the story of an uncatchable fish” and a haunting personified account of a hanging tree.

The set allows the audience to take in the music as they view the works.

Haskins said copies are available at his store, Haskins House, located at 534 2nd St. in Portsmouth, as well as his website, www.haskinshouse,com, and on Whitley’s site, www.josiahwhitley.com.