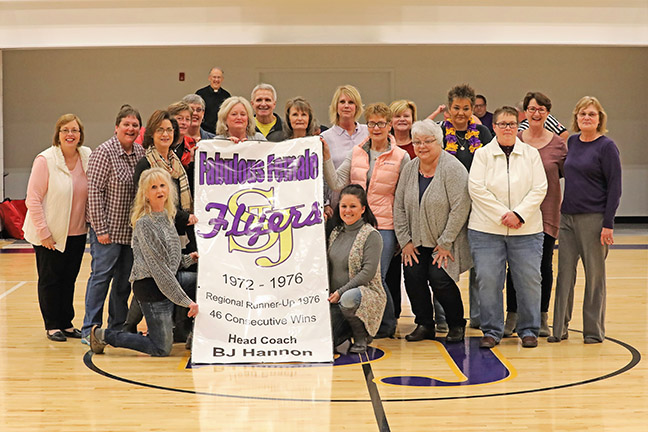 It all started with a pair of Converse canvas tennis shoes.
Those shoes and the desire of group of high school girls to play the sport of basketball were the seeds to the first girls’ dynasties in the Tri-State area.
The year was 1971 when several students at St. Joseph High School approached teacher Mary Jane (Clyse) Handley about coaching a girls’ basketball team.
Handley — who taught at St. Joseph with her husband Jeff — agreed to take the job, but she first went to seek permission from principal Pat Sheridan.
Sheridan OK’d the request and told Handley that “I’ll buy you a pair of tennis shoes and that will be your salary.”
A meeting was held and the room was filled with anxious girls who had no idea of the impact they would have on the sport in the area.
In 1972, the Lady Flyers began with a loss in the Toledo Invitational Tournament that invited teams of all sizes and St. Joseph’s first game was against a Division I school considered the best team in the tournament.
What followed was 46 straight wins before a loss in the regular season finale against Russell, Ky.
The Lady Flyers won their sectional and district as well as the first game of the regional tournament.
In the finals against Fisher Catholic, the officials lined the teams up facing the wrong baskets. St. Joseph got the tip and scored only to have the officials credit the basket to Fisher Catholic despite being a correctable error.
The Lady Flyers never really recovered and lost by eight points.
“That kind of messed with us,” said the team’s point guard Sue Goldcamp.
Handley coached the team for two years before she became pregnant and the search for a new coach began. Terri Hannon turned to her uncle, the late B.J. Hannon, who said yes even though he was already coaching a boys’ grade school team.
“I would come home from Wilson’s (Sporting Goods) and eat and then go coach the boys’ team, and then go from there and coach the St. Joe girls’ team,” said Hannon in an interview several years ago.
“I had never coached a girls’ team before and the hardest thing was keeping myself from patting them on their butts like I would the boys.”
Because of their dominance, coach Hannon nicknamed the girls’ “The Fabulous Female Flyers.”
Hannon coached the girls like he did the boys and the girls had no problem with his coaching style. In fact, they embraced it.
“We were a team. We knew what the other one was going to do. Mary Ann (Holmes) Newhouser was our shooter, but if she was off someone else would score,” said Andrea (Waginger) Harvey.
“B.J. for years coached boys. He coached us like boys and he always had us ready.”
Because they were coached like boys, the girls played a very physical game that wasn’t seen at that time with girls’ team.
Terri Hannon said the physical style created one memorable game she won’t forget.
“The game I liked the most was the one against Boyd County the first year B.J. coached us. We were playing hard and physical, hitting shots and knocking people around,” she said.
“They left at halftime. Their coach told B.J. we played like a bunch of boys. They’d had enough.”
But there was more to this team than just talent and coaching. An outstanding all-around athlete, Goldcamp said the team had comradery and chemistry.
“There was no bickering. We were a good team. No one cared who scored. We were very unselfish,” said Goldcamp who went on to play at the University of Charleston where she also played softball and earned NAIA All-American honors.
When members of the team gathered on Dec. 20 for a reunion of those dynasty years, there were plenty of stories and memories tossed around.
Terri Hannan said B.J. Hannon’s wife Lavena had a superstition that would not be allowed in today’s world.
“Lavena would sit in the same spot and smoke the same number of cigarettes every game,” said Terri.
Besides Goldcamp and Terri Hannon, Newhouser and Harvey were two of the top outside shooting threats which seemed logical since they were first cousins.
“Mary Ann had a real nice bank shot from the left side. I called Andrea ‘Tish’ because that was the sound her shots made going through the net,” B.J. Hannan said in the interview. “All the girls were good basketball players, but they were also good athletes. We had really good softball teams, too.”
If Mary Jane Handley still has those old shoes, maybe they could have them bronzed and put in the trophy case to signify the start of that dynasty.
Or at least have them colored purple and gold.

The previous time the Rams played in a Super Bowl, the opponent was New England. It didn’t work out so... read more