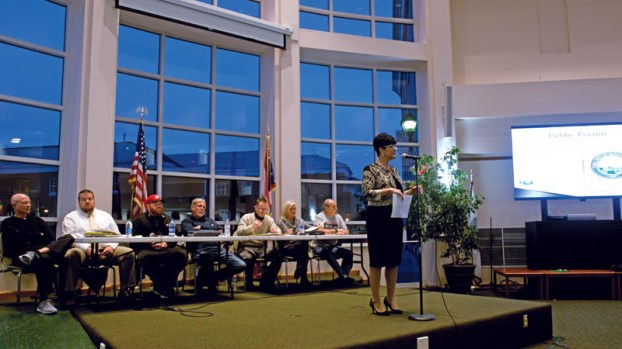 Over 100 attend event on Thursday to discuss city’s future

On Thursday night, members of Ironton’s city council and the mayor explained the city’s financial situation, why they voted to raise fees and offered people in attendance a chance to give their opinion as to what plan they preferred to help correct the city’s revenue issues.

The forum was held in the Mains Rotunda on the Ohio University Southern campus with around 100 people attending. There were around 2,000 watching on Facebook Live and members of the OUS electronic media department taped the event for viewing on television.

The forum began with Mayor Katrina Keith explaining how the city government is set up, the city’s budget and how it is split among the departments and how many people are in each department.

Keith explained that the city doesn’t receive money like it used to. The state has cut the amount of tax money that is sent back to cities. Ironton gets $302,433 less from the state than it did in 2010.

The city also has lost $350,000 in revenue after federal revenue sharing and inheritance tax no longer comes into city coffers.

A second issue is that the city has 10,800 residents but only 2,514 of those residents filed taxes. Those 8,286 people not paying taxes include children, retired people and people on public assistance.

“The reason that is an issue is income tax makes up almost 46 percent of the general revenue fund,” Keith said. “So, if we don’t have people working, we do not have income tax coming in and we are not able to give you the services that you deserve.”

In 1969, the city put on a 1 percent income tax. Last year, the city took in $2.4 million, which makes up half of the city’s general revenue fund.

There were four options presented, including going to a volunteer fire department, increased fees on utility bills, putting a millage on homes and increasing the city income tax from 1 percent to 2 percent while eliminating the municipal fee.

Three councilmen then presented their ideas for keeping the city budget out of the red. By state law, cities are not allowed to operate a budget and have a deficit, meaning, each year, the city council is required to spend only the money that is generated by city taxes and fees. The ideas that were presented were proposals and the council is still in discussion on what, if any, of the four plans, they would go with.

Keith presented the concept of cutting out the Ironton Fire Department.

She said that the police and fire departments have a combined budget of $2.7 million. She said there is talk of cutting those departments, since they have the most employees, but “that is none of us want to see walk out the door. If my house is on fire, I sure enough want to see the fire department come and put out the fire. You sure enough want a police officer to come when someone comes and robs you. This isn’t fluff, these are normal services.”

He said that one thing he likes about the utility bill is that everyone pays, not just taxpayers.

He said that with increased fees, the city would not dig itself out overnight, because the city didn’t get into the current situation overnight.

He suggested that all fees have a small increase every year to go along with the increased costs of goods and services.

The suggestions include raising the water fee to $7 per thousand gallons while eliminating the $2.50 water administration fee, the sanitation rate would go to $10 per thousand gallons, the storm water fee would be a flat $24 per month, eliminate the $5 flood fee and replace it with 4-mil levy that would bring over $500,000, eliminate the $15.64 municipal fee, and have a $15 fire fee and a $15 police fee.

He said the city would also have to become more enterprising with the water that is sold to other agencies and the sewage the city takes in.

“I don’t think that just continuing to push our rates on residents is a way to get out of this,” he said. “We need to expand our services.”

Councilman Craig Harvey gave a short talk on letting city residents vote on the November ballot on a levy that would go on the value of their houses. The money would go toward funding the police and fire departments. The 20-mil tax levy would be $20 per every $1,000 assessed value per year. So, if a house were valued at $100,000, the property owner would pay $70 per year.

He said by removing the police and fire departments from the general fund, it would free up money to be used for other services and departments.

“I tend to disagree with anyone who says we need to put fees on our utility bills because everyone pays them,” he said, adding that not everyone does since renters do skip out on paying their water bills.

The value of property is decided by the county auditor’s office.

Councilman Jim Tordiff talked about the revenue option of raising the income tax fee from 1 percent to 2 percent while eliminating the municipal fee.

He said that the 1 percent income tax and the monthly $15.64 fee brings in over $3.3 million and if the income tax went to 2 percent, it would bring in over $4.8 million.

He said he is as conservative as they come and not a fan of all the taxes people have to pay.

“Having said that, he is a proponent of the tax increase tonight,” he said, adding that his 44 years of government service has given him a good understanding for a government to operate.

The income tax increase proposal, if chosen, would have to be decided by voters on the November ballot because having a special election to decide it would cost the city too much money.

He said he wasn’t asking for the support of voters on his proposals, but that he did think his idea was the best, although it had strengths and weaknesses like all the other proposals.

The city will, in the future, put the same options on a survey on the water bill so that the council can get a better understanding of what the residents want.

During the audience participation part of the forum, people asked about a number of things.

One was what the city was doing for economic development. Kline said he is part of a group that meets at OUS to discuss economic development in Ironton. Also, the council explained that most companies do not like to talk with city officials when they are planning to put in a business because there is the possibility of the official leaking the information and a rival business coming in before them or doing something to mess up the deal such as buying the property from under them.

Most companies only deal with entities like the Community Action Organization and the Lawrence County Economic Development Corporation, both of which help the city with economic development in such deals as bringing in the Holiday Inn hotel, Frisch’s and Tudor’s Biscuit World.