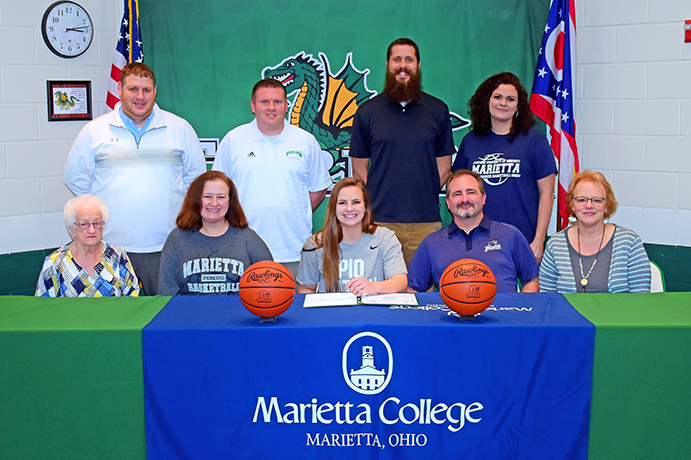 PROCTORVILLE — Kelsie Warnock doesn’t wear glasses, but Fairland Lady Dragons’ coach Jon Buchanan thinks she goes through life — or at least basketball season — with blinders on.
That focus on the sport and the work ethic that goes with it are some of the key reasons the 5-foot-8 senior signed a letter-of-intent on Wednesday to play for the Marietta College Lady Pioneers.
“Whatever you put in front of her, she’s going to do. Everybody is a role player. Her role expanded by having to score a little bit, to handle the ball a lot more, maybe guard the other team’s best player. She just takes it in stride. Whatever we put in front of her, she just tackles,” said Buchanan.
Warnock picked Marietta over Muskingum College and Alderson-Broaddus. She knew all of the schools would require hard work, but she just felt at home with Marietta.
“I been debating for a while, but I went on that visit to Marietta and I just connected there,” said Warnock.
Even though the level of competition goes up a notch or two, Warnock is ready for the challenge.
“It’s a much faster pace. Marietta is a great shooting team. I’ll have to put in a lot of work this summer and make sure I’m in shape. I’m excited,” said Warnock.
“One thing that sets us apart is we work all year long. We go to Marietta during the summer and Cedarville and all these different camps. You bond with your teammates over stuff like that in the year-round work.”
Buchanan said Warnock not only has the work ethic but the right mentality to be successful at the college level.
“Her game has grown every single year from a kid who just played defense her first year to now. She’s a huge part of our team. She’s a great leader on and off the court,” said Buchanan.
“In the speech she gave, she talked about being a family and our program. She talked about an assistant coach coming into ‘our program.’ That’s how much she owns what we’re doing. That means a ton to me to have her say that.”
Although she plays volleyball and runs track, Warnock said basketball is her first love.
“Basketball is just something I’ve grown up with all my life. They don’t start volleyball in Ohio until the seventh grade,” said Warnock.
“My mom (Kim) was my first coach in buddy league and it was just this love. It was our connection. I just fell in love with the game.”
Once she reached high school, Warnock’s goals changed but she still have people in her life that were role models and provided encouragement.
“This year I got my 500th rebound and that was something I’ve work for. But as a team, everybody is just trying to make it to (the state tournament). That’s just been my goal,” said Warnock.
“My sister (Sarah) was on the team four years ago when they made it to state back-to-back. Although she wasn’t a key player, she was just such a hard worker. She is one of the people I looked up to as a basketball player who made me want to work hard.”
Buchanan said Warnock is somewhat of an overachiever because of her attitude and work ethic.
“She’s only the second player I’ve coached in my 10 years here that has averaged a double-double,” said Buchanan. “She’s a really strong kid, but she’s not the biggest kid in the world. But she’s a really tough kid.”
Warnock plans to major in childhood education and later add special education as she looks to become a teacher.
And coach.
“That’s why Marietta was one of my top picks because of coach (Kole) Vivian. I was able to go to a couple of games and I liked the atmosphere and the way he coached. He reminds me of coach Buchanan. I just liked the way he handles himself and the team. He’s so calm under pressure and I like that,” said Warnock.
Kelsie is the daughter of Kim and Sam Warnock.

Jim Walker jim.walker@irontontribune.com BIDWELL — Going back-to-back was a back breaker for the St. Joseph Flyers. After a physical game... read more