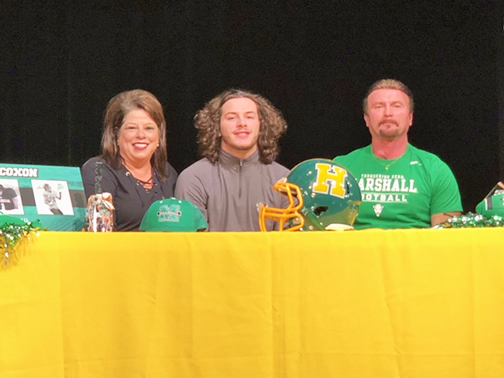 Huntington High football standout Ty Wilcoxon signed a letter-of-intent with Marshall University on Wednesday. Wilcoxon is flanked by his parents Tina and Brent Wilcoxon. Tina teaches at Chesapeake and Brent teaches at Fairland and was the quarterback for Ironton when they won the 1979 Class AA state championship. (Photo Submitted)

HUNTINGTON, W.Va. — Ty Wilcoxon is a true student-athlete. Both of those facets are the reason he is part of the Marshall Thundering Herd football recruiting class.
The Huntington Highlanders senior running back was injured this past season, but the Herd saw past that to offer him a spot in their recruiting class.
Thanks to the Promise Scholarship for students who plan to major in either journalism, engineering, business, biometric systems and forensic identification, Wilcoxon has been invited to play for the Thundering Herd.
Wilcoxon was happy to be included in the Marshall recruiting class, especially after suffering a broken leg that shortened his senior season.
The 6-foot-2, 210-pound Wilcoxon said he was really grateful for “finally getting a fair shot. I’d also like to thank my parents and teammates.”
Wilcoxon’s parents are no strangers to academics and athletics. Mother Tina is a teacher in the Chesapeake school district and father Brent is a teacher in the Fairland district who has also coached high school football and basketball and was the starting quarterback when Ironton won the Class AA state championship in 1979.
Before breaking his fibula, Wilcoxon rushed 103 times for 823 yards and seven touchdowns. He was leading the West Virginia Class 3A in rushing at the time of the injury.
Ty was named the MVP of the Pike County Bowl when he ran 18 times for 122 yards and a touchdown against Belfry.
Against Riverside, he had 26 carries, 208 yards, and 3 TDs and was the Metro News Player of the Week.
He carried 30 times for 250 yards — 203 in the first half — and a touchdown against George Washington and was the Class 3A Offensive Player of the Week.
He broke his leg against South Charleston after the first quarter. He had 10 carries for 86 yards before being hurt.
Despite the injury, he was first team running back in the MSAAC which is considered the top conference in West Virginia, second team all-area and honorable mention all-state.