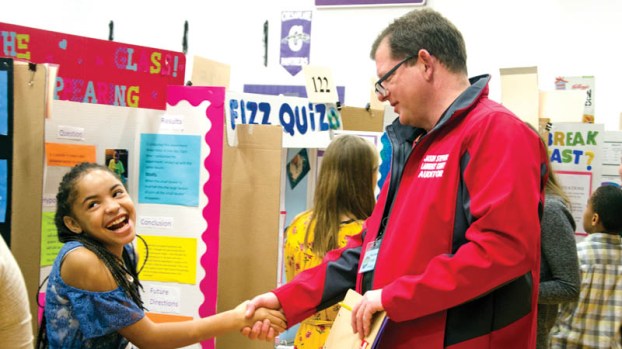 CHESAPEAKE — The Lawrence County Science Fair had one of its biggest turnout in years on Thursday.

According to Julie Walters, student service coordinator for the Lawrence County ESC, who coordinates the fair, this year saw an major increase in the number of projects to qualify for the competition.

In total, 157 students, ranging from fifth through eighth grades, took part in the fair, with 136 individual projects and 10 group projects entered.

In order to take part at the county level, students had to earn a “Superior” rating at the individual science fairs at their schools, held earlier this year.

The host school for the event rotates each year, with Thursday’s duties falling to Chesapeake Middle School.

The school has had a great run at the event, sweeping all of the top awards at last year’s fair and placing highly in prior years.

The projects all used the scientific method to test a hypothesis and see how the results measured up.

Kamryn Wilson, 12, a Dawson-Bryant middle school student was testing which kind of lipstick would last the longest.

She said the cosmetic had a long history dating back to ancient Egypt.

“If lipstick doesn’t dry, it won’t last long,” she said, measuring brands that lasted from from 8 to 16 hours.

South Point Elementary fifth grader Braydon Jackson, 10, tested the ingredients used to make slime and sought to determine whether name brands, such as Elmer’s Glue would have better consistency than off brands, such as Great Value.

“My hypothesis was the named brands would work better, and that’s how it turned out,” he said, pointing to the two bags he had on display and noting that the name brand mix had a more gooey quality.

Addison Murray, 11, a fifth grader at St. Lawrence School was studying the effects of music on heart rate.

“I played music for two minutes,” she said, stating that she tested pop, metal, rap, country and classical music,

She then tested the heart rate of the listener, with pop music producing a heart rate of 102, metal yielding a 92 and classical a 77 among her findings.

“Classical was the only one that calmed them,” she said.

Another project was “Penny for Your Sauce,” by Braydon Price, 11, of Chesapeake Middle School.

He tested three types of hot sauces from Taco Bell — Mild, Hot and Diablo — to see how well they could be used to clean pennies.

He said he hypothesized that the hotter the sauce, the better it would work, but, from his experiment, determined that this was not a factor.

“It’s the salt, mixed with citric acid that does it,” he said.

Those who earn a superior rating at the county fair are eligible to move on to the District 14 Science Day, which is set for Saturday, March 23 at Rio Grande University’s Lyne Center.

Result of the judging were set to be announced Thursday evening. For a full list of winners and more photos from the event, see the Weekend Edition of The Tribune.

‘Your CBD Store’ open in Ashland

ASHLAND — For people looking for a different kind of way to help with ailments, Your CBD Store, specializing in... read more