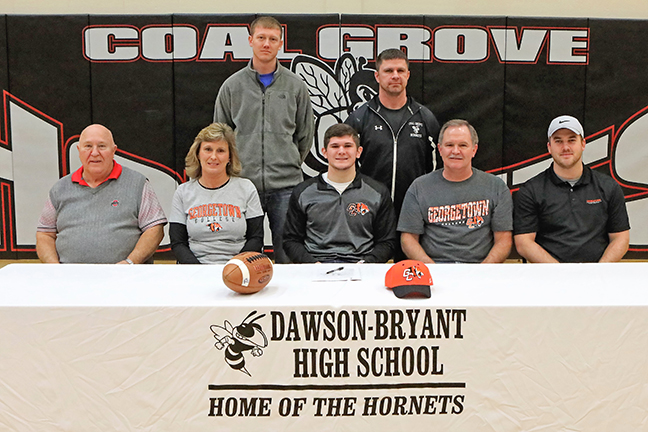 COAL GROVE — It has been said that some things never change.
Case in point is Nate Harmon.
The Coal Grove Hornets All-Ohio senior football standout is swapping one tradition for another after signing with the NAIA power Georgetown Tigers on Friday.
The multi-talent athlete entertained numerous offers that included Marshall, Pikeville, Marietta, Otterbein, West Virginia State, Mount St. Joseph and Kentucky Christian University.
With 19 conference championship, three national championship and two runners-up, Georgetown offers the football traditions Harmon has become accustomed playing at Coal Grove.
“I wanted to go to a strong program that wins games and wins conferences and has a shot at the national championship and a school I like being at location-wise plus they have a good academics and science program,” said Harmon.
Evan Ferguson was Harmon’s head coach the past two seasons. Ferguson said Harmon will help the Tigers in their quest to continue the winning traditions.
“Nate epitomizes everything you want to see in a high school football player and I’m sure Georgetown will be very happy to see what they get the next four years with him. He works his hind-end off every single day. He gives everything he’s got and he’s willing to play whatever position he can,” said Ferguson.
“He just wants to be on the field and win. And I think Georgetown is a great place for that. They’re one of the top programs in NAIA and he’ll go take his winning tradition to Georgetown.”
The Hornets won an Ohio Valley Conference title and made a deep run in the playoffs his junior year and that is a tradition Harmon wants to continue.
“It’s always a possibility once they make playoffs which is usually about every year and they usually go pretty far. Two years ago, they went to the semifinals,” said Harmon.
Harmon was first team All-Ohio Valley Conference, first team All-Southeast District in Division VI and special mention All-Ohio. That’s another tradition Harmon wants to keep alive.
“I’d like to be an NAIA All-American by the time I graduate,” said Harmon.
Georgetown coaches haven’t decided what position is best suited for Harmon, but that isn’t a problem for him.
“They said I could play special teams right off the bat pretty fast and then maybe second year safety, possibly wide receiver or running back if I put on a little weight,” said the 6-foot-2, 195-pound Harmon.
“Safety was what I originally was recruited for. I just like being on the field.”
Ferguson echoed the fact Harmon is a versatile player and asset.
“He’s playing four sports. He can play anything he wants to play. Georgetown can use him in several different positions. He’s going to be a multi-facet player for them,” said Ferguson.
One personal tradition that will change for Harmon is playing multiple sports. Besides football, Harmon also plays basketball, baseball and track.
Bu Harmon said that is a blessing in disguise.
“I think it’ll be nice to have one sport to focus on because year-round I always have a practice to go to or something to do. Now, it’ll be just school and football and the offseason will be getting stronger and faster getting ready for football will be pretty nice and stress relieving,” he said.
Playing college football has only been a recent goal for Harmon.
“Not until going until going into my sophomore year. I hit a growth spurt and got taller. I thought, if I put some more weight on and get faster and stronger, maybe I could have a shot,” said Harmon who admitted football has always been his favorite sport.
Harmon is learning toward a degree in exercise science.

Malone to continue fun of bowling at Shawnee State