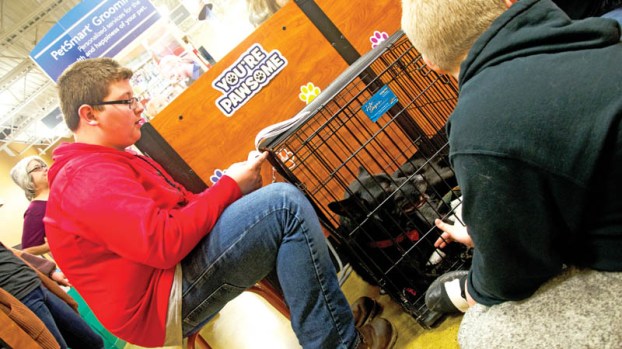 A group of middle school students and from Dawson-Bryant schools studying interactions with animals as part of a reading project at PetSmart in Ashland, Kentucky on Tuesday.

A group of students from Dawson-Bryant Middle School believe that animals can be calmed through interaction and they put their theory to the test on Tuesday.

The students visited PetSmart in Ashland, where they took turns reading to dogs, while other students observed and took notes on the animals’ reactions.

Teacher Penny Absher-Huff said it is something the students have been studying in class.

“The dogs notice,” she said, as the students did short readings with them. She noted that one dog had not removed its paw from a student’s hand during the session. “And it builds confidence for the students.”

She said she had contacted Rebecca Meadows, the store leader, about bringing the group of eight seventh grade students and three high school volunteers to visit with the  pets and they were met with a positive reception by the store.

“They went over and beyond,” she said.

Absher-Huff said she had also spoken with Dee Dee Barfield, at the nearby Chik Fil-A, who had agreed to treat the group to lunch afterward.

While PetSmart does not normally keep dogs on site, they do host adoption events with rescue groups, who bring animals to the store to find them homes.

The group of dogs on Tuesday were from such an effort, from Tri-State K9 Life Line, one of the store’s adoption partners.

Absher-Huff thanks both PetSmart and Chick Fil-A for their help in the school’s trip.

“We have two great community businesses here,” she said.

Will now have case heard in front of 3-judge panel Following almost three weeks of jury selection, with the trial... read more