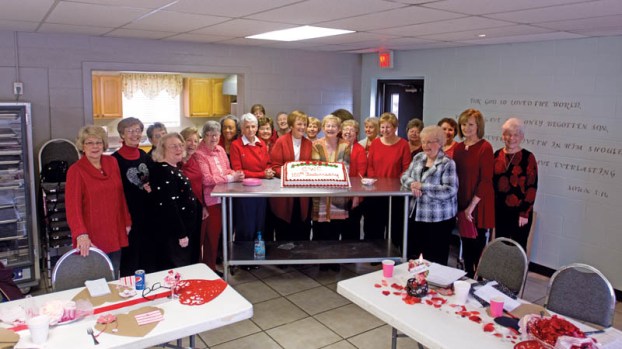 Members of the Children Welfare Club celebrate the 100th year of the organization with a luncheon and cake.

One spring, a hundred years ago, Mrs. Carl Moulton was visited by a lady from Chicago who was part of the Child Conservation club, which helped out children in need of aid.

Moulton, who’s name remains a part of Ironton as Moulton Field, was inspired and gathered up a group of like-minded women and formed the Child Study Group. In November 1919, the name of the club was changed to the Child Welfare Club and they gave themselves a mission of raising funds to help the children of Ironton get milk.

That mission expanded and changed over the years but the club continued and on Thursday, the club marked a century of work in the basement of the Ironton First Church of the Nazarene with a light lunch and many artifacts of the club including photos, cook books, milk receipts and newspaper articles.

Child Welfare Club president Jane Davis said that she thinks it has been great that the club has lasted so long.

“I mean, how many other clubs from that time are still in existence and have that history,” she said, adding that it is dedication to the community and to children that has kept the club going. “It is a desire to serve. We do different things now, we try to work with the schools.”

In the past century, the Child Welfare Club has had over 56 different betterment projects, many that carried from year to year, including story hour at the courthouse, building the first public park in Ironton, helping the Briggs Library set up a children’s section, paying a nurse to give children medical care and setting up the city’s first kindergarten school.

They paid for these projects by selling cookbooks, teaching classes and even selling things like rain bonnets and “vigilante” whistles.

Now, the Child Welfare Club has several fundraisers throughout the year including a chicken salad sale, a salad supper and a talent auction.

The club stopped distributing milk in 1974 when the U.S. government starting supplying it to all children, but the club continued and still helps needy children. The club established the Eddy Test scholarship in 1960 and that continues.

The current club donates to Backpack Buddies to make sure kids can eat on the weekends, Tools 4 Schools, to the City Mission and Lawrence County Domestic Violence Shelter as well as giving to Christmas and Thanksgiving projects. Recently, several members taught the boys in Ironton Elementary School’s Gentleman’s Academy how to sew on a button.

They are also gathering the plastic bottle caps, which get recycled into a “buddy bench” for children’s playgrounds.

Carol Allen has been a member of the Child Welfare Club since the early 1970s and has been its president twice. She thinks it’s wonderful that the club has been around for 100 years.

“To do all the things we have done for the children of this community and spearheading movements, I’m very proud to be a member,” she said, adding that she and three other members are descendants of some of the original members of the club. “It’s so good to see the longevity in this club and all the love those families have given over the years.”