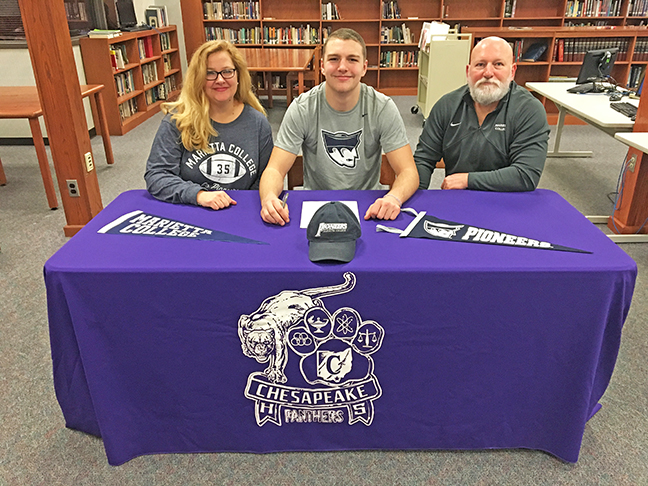 CHESAPEAKE — There might be a new movie called Jack and the Beanstalk. It stars Dillon Lunsford as the beanstalk.
As a wiry 5-foot-11, 160-pound sophomore, Lunsford decided to play football when the cross country program was discontinued. He was listed as a wide receiver and defensive back.
The following year, Lunsford was 6-foot, 175 pounds and moved to tight end and outside linebacker.
This past season, the Chesapeake Panthers senior football standout continued his upward growth as he hit 6-3 and 190 pounds, thus causing the coaching staff to make him an offensive lineman and inside linebacker.
Lunsford will get to see how much more he grows and develops as a football player after signing a letter-of-intent to play for the Marietta College Pioneers on Thursday.
The continued growth spurts gave Lunsford the hope he could play football despite never playing until his sophomore year.
“I had always been attracted to (football), but I thought I started too late. I used to run cross country, but we don’t have that any more. So, I thought I’d pick something and I picked football and I fell in love with it,” said Lunsford.
“I just love all the contact. It’s a physical sport and that’s how I’ve grown up being physical with my family. I just love physical sports. I wrestled. It’s just fun to try and overpower another player.”
Chesapeake coach Andy Clark has watched Lunsford’s transformation not only in size but in talent.
“He came in and played three different positions on offense and three different positions on defense just because of his progress physically and as a football player as well,” said Clark.
“I think he’s still growing and I think he can still progress as a player. Physically, he hasn’t reached his potential, either.”
An All-Ohio Valley Conference selection this past season, Lunsford said he picked Marietta because some familiar faces and hospitality.
“We have some players from last year who went up there and played so I’ve been looking at it. They got me a foot in the door. When I went up there, the players and coaches were all so helpful. The campus itself was beautiful, so I just fell in love with it. And it’s close to home,” said Lunsford.
The Pioneers current plan is to try Lunsford at his current position of inside linebacker, but he is fully aware that could change.
“I’m going to try and play inside backer, but I’ll do whatever they need me to be,” he said. “It’s easier for me (to change positions) since I’ve only played for three years. I’m not dead set on one position. But inside backer is what I’m aiming for.”
Clark said Lunsford’s versatility makes it easy to move him to a position that best helps the team, as was the case with the Panthers.
“He served the role we needed on offense. In college, he’s going to be on the defensive side. He’s got a motor. He plays hard, practices as hard. He did a good job this year. It was the first year he’d played inside linebacker. He got to where he could make his reads,” said Clark.
“It’s a shame we couldn’t have had him here for two more years. I think he can play there. I think he can play an outside linebacker role or defensive end depending on how big he gets. But as a linebacker he got better as the season went along. If he continues to work, that’s going to happen.”
What Lunsford wants to happen is to make the starting lineup as a junior, or sooner if possible. But he plans to be patient.
“I’m a younger player, so I just want to be varsity by my junior year,” said Lunsford. “I like inside backer. I just love tearing up the line. It’s so much fun.”
Lunsford plans to major in psychology and enter police work.

No. 24 Maryland aims to keep momentum vs No. 6 Michigan

The Associated Press A look at the upcoming week around the Big Ten: GAME OF THE WEEKEND: No. 24 Maryland... read more