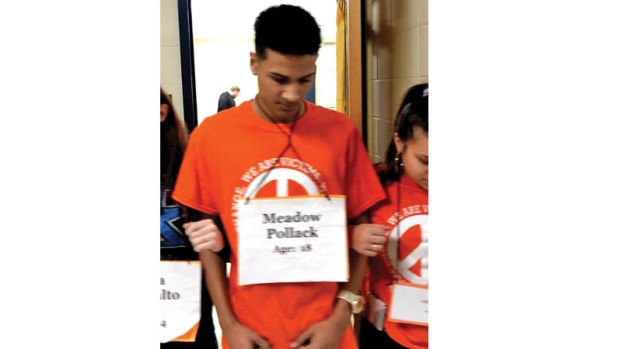 SOUTH POINT — Students at South Point High School staged an event on Thursday to mark the anniversary of the school shooting at Marjory Stoneman Douglas High School in Parkland, Florida.

At 8:53 a.m., about 100 students walked out of class, each bearing a sign with the name of one of the victims of school violence, said Austin Johnson a student and organizer of the event.

The former Marjory Stoneman student who was the perpetrator of the shooting was apprehended. Following the tragedy, a large number of surviving students spoke out in support of gun control and increased school safety measures, prompting a national discussion.

Johnson said the aim of students at South Point was two-fold: to remember those killed and to “stand up for school safety.”

“This is not political,” he said. “People are dying. Things need to change.”

Johnson said the students also listened to a song “Shine,” which was written by students in the drama club at Marjory Stoneman Douglas.

Johnson said he has not been able to stop thinking about the event in the year since it occurred.

“These students were my age,” he said.

Demonstrations and tributes took place across the nation on Thursday to mark the anniversary of the shooting.