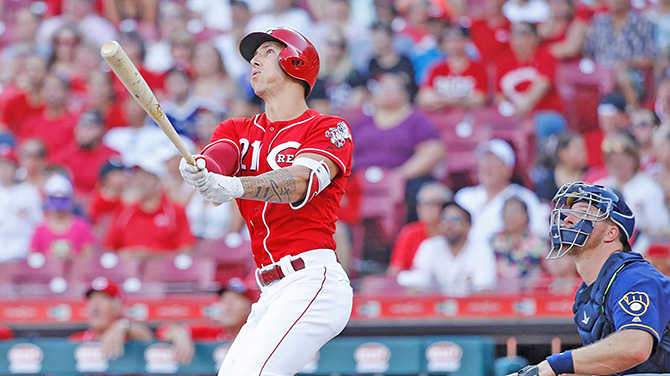 Cincinnati Reds’ pitcher Jared Lorenzen connects for a grand slam home run last season, one of four home runs he hit. Lorenzen is hoping to add the outfield and batting to his pitching duties this season. (Photo Courtesy of The Cincinnati Reds.com)

Michael Lorenzen doesn’t claim to be another Babe Ruth. But he wouldn’t mind trying to be Ruth-esque as a player.
The legendary Ruth — who saved baseball with his prestigious power as a hitter — actually spent the first five years of his major league baseball career as one of the best pitchers in the game, twice winning 20-plus games and holding a World Series record of 29.1 scoreless innings that stood until 1961.
Lorenzen has spent the four years of his Cincinnati Reds’ career mostly as a reliever and an occasional starter. But during his college career at Cal State Fullerton, the right-hander spent his off days as a pitcher patrolling center field.
The 27-year-old would like nothing better than to return to that time in his life when he pulled double duty and he did it with great success, but he won’t be upset if it becomes a pitching-only situation.
“I’ve always wanted to be a starting pitcher. I love starting on a personal level. It’s fun to go out there and throw 100, 110 pitches a game. I think that’s fun.,” said Lorenzen.
“But I love what I’m doing now in the bullpen. I like to come in and pitch a game, stay in and hit. I think they are getting more serious about using me in the outfield.”
And it seems the Reds’ new manager David Bell and his coaching staff are open to the idea of 6-foot-3, 217-pound Lorenzen playing on both sides of the batter’s box.
“They just said be ready for anything. I like that. I don’t need any kind of structure. I’m a ballplayer. I love playing this game. I’m better in the outfield than anything I do on a baseball field. No one knows that. I’m excited with our new staff that they’re going to let me do it,” said Lorenzen.
Bell is willing to see what Lorenzen can do, but he admitted that it will probably be a very limited role.
“He’s so competitive. He takes care of himself. To have an athlete like that, that at the very least can have good at-bats and handle the bat and not be an out, I think it’s an example and kind of inspiration for all of our pitchers. We’ll find a way to allow him to contribute in that way,” said Bell.
In 2018, Lorenzen appeared in 45 games but only three as a starter. He worked 81 innings with a 4-2 record and 3.11 earned run average. He struck out 54, walked 34 and gave up 78 hits.
But he was called upon to hit — mostly in a pinch-hitting role — and in 31 at-bats compiled a .290 batting average with four home runs including a grand slam. He had 10 runs batted in and c out nine times while walking twice.
During his junior year at Cal State Fullerton, Lorenzen was 3-0 with 19 saves, fifth best in the nation. He also batt .335 and led the Big West Conference with 54 runs batted in. He led the team with seven home runs to go with 12 doubles, four triples and 21 multiple-hit games.
Those numbers made him a semifinalist for the Dick Howser Trophy.
If called upon to play in the outfield, Lorenzen said he is ready.
“In the offseason, I work on every single thing, even baserunning,” said the well-conditioned player who is known for his vigorous workouts.
American League Rookie of the Year Shohei Ohtani was a media and fan favorite last season because he pitched and would bat. However, he was used as a designated hitter, not as a fielder.
If he gets a chance to play, Lorenzen hopes it will help change some of the thinking process among baseball management as well as coaches.
“I think baseball — the way it boxes people — really frustrates me. A guy has other things to offer but we’re not going to let him because he’s just a pitcher. He’s labeled that. It doesn’t make sense to me,” said Lorenzen.
“When you go to college, they’re going to do anything it takes to win. And if that means you’re a pitcher and a hitter, we’re going to do that.”
One thing that could dampen Lorenzen’s hopes of being used in the outfield rotation is the number of candidates on the roster.
A trade with the Los Angeles Dodgers brought outfielders’ Yasiel Puig and Matt Kemp to the Reds who already have returning talent such as Scott Schebler — a power-hitting lefthander who has the speed to play center field — and Jesse Winker who says he’s 100 percent after shoulder surgery and was on a pace last season to be a candidate for Rookie of the Year. Plus, there’s Phillip Ervin who played well after his call-up when Winker went on the disabled list.
And let’s not forget the Reds’ No. 1 minor league prospect Nick Senzel who was drafted as a third baseman but reportedly will be given every chance to be the regular centerfielder.
That doesn’t bother Lorenzen who is more concerned with the Reds digging their way out of the National League Central Division cellar and challenging for a playoff spot.
“Talking to the guys, we’re extremely excited where we’re at from a roster standpoint,” said Lorenzen.
“With our front office, they see how our clubhouse is and how important that is, so they’re adding the pieces together and saying this is a special clubhouse. We’re looking forward to making a run this year for sure. We have guys who think the division is ours. It’s not going to be handed to us. We have the ability to go out there and take it. I think the clubhouse will play a huge role in that.”
And Michael Lorenzen should play a huge role as well, whether he pitches, bats or plays in the outfield.
Kind of makes you think there is a little Babe Ruth in him.

Ironton Fighting Tigers’ Charlie Large goes up strong and concentrates as he gets fouled while scoring two of his 18... read more