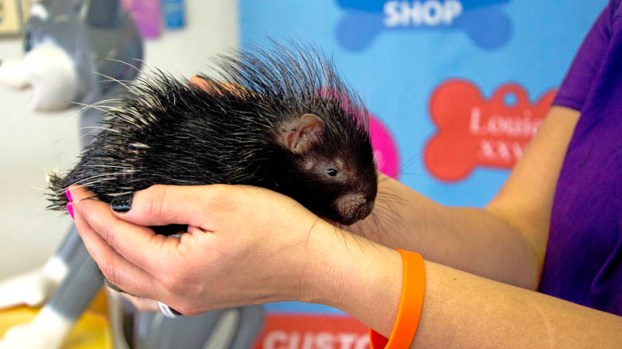 Being only five days old, Barbie, an African-crested porcupine, does not have the ability to use her quills yet. Kate Barker, owner of the BARKer Farm Petting Zoo, said it is safe to pet her and the animals only use the quills when provoked.

She’s only five days old, but Barbie is getting acquainted to her new home.

The animal, a five-day-old female African-crested porcupine, is the newest addition to the Barker Farm Petting Zoo.

“She came from a litter of four and they’re born with their eyes open,” Kate Barker, who co-owns the petting zoo and the BARKer Shop in Ironton, said. “They hit the ground running.”

She said Barbie spent the weekend watching TV with the family and running around the house.

“She gets along with my greyhound and my monkey,” Barker said of the indoor animals.

She said they are keeping Barbie inside for the time being, but she will eventually join another porcupine in a habitat outdoors.

Barker said Barbie was purchased from a breeder in Dayton over the weekend. She has been keeping her at the shop and bottle feeding her.

The animals are legal in Ohio, with a USDA permit and the meeting of habitat requirements.

Their diet consists of vegetables, fruits, grass, potatoes and apples.

While Barbie is small enough to fit in a hand now, she may grow as large as 30-40 pounds and have quills as long as 13-15 inches. Her species is the largest type of porcupine in the world.

Barker said they can be “very loveable” and can even follow commands.

As for the animals’ quills, Barker said they are only an issue when provoked and the animals give off warning signs before using them.

“They’ll rattle their tail — the sound resembles a rattlesnake and stomp their feet,” she said. “If the predator doesn’t ease off, they’ll back into them.”

When not agitated, the animals are perfectly safe to pet.

Barker said she plans to have Barbie out to meet the public when they have a booth at the WSAZ Home & Garden show at the Big Sandy Superstore Arena in Huntington from March 8-9.

She said she also hope to take her to children’s events and use her as the basis of educational programs about animals.

“How many times do they get the chance to pet a porcupine,” she said.