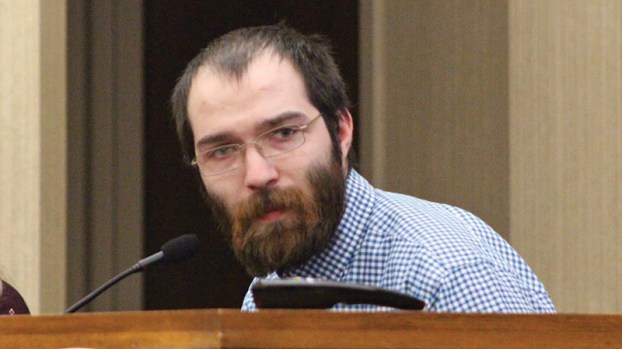 Arron Lawson takes the stand Tuesday to ask the judges to spare him of the death penalty. (Photo courtesy of Courtney Hessler/The Herald-Dispatch)

On Tuesday, during the mitigation hearing about what penalty he will pay for killing four people, Arron Lawson, 24, of Pedro, took the stand in the afternoon in the Lawrence County Common Pleas Court of Judge Andy Ballard and spoke to the panel of three judges who will decide his fate.

Lawson started his three-minute talk be saying that he knew what he did was wrong and that is why, after two days on the run from law enforcement, he walked out of the woods and surrendered to a deputy and then gave a full confession when speaking to investigators.

He said he was sorry for everyone he hurt, not just the ones that were killed, but every single person that he hurt, including all his family and the community.

“I don’t expect sympathy, I expect whatever you give me, even if it is the death penalty, that I will take it,” Lawson said. “I will be at peace with it.”

On Monday, Lawson was found guilty of 12 of the 13 charges against him by a panel of three judges including Ballard, retired Cuyahoga County Common Pleas Judge Janet Burnside and retired Brown County General/Domestic Relations Judge R. Alan Corbin.

Lawson was found not guilty of the rape charge and its specification after McVay argued that his client was overcharged with rape, as well as the abuse of a corpse charge, which both stemmed from the same victim, Stacey Holston.

Those who took the stand on Monday included Lawrence County Sheriff’s Detective Sgt. Aaron Bollinger, who finished his testimony from Friday, and Hallie Dreyer, a forensic scientist with the Ohio Bureau of Criminal Investigation (BCI).

While Dreyer was on the stand, she talked about all of the DNA found at the scene, including whose blood was where throughout the residence, that Lawson’s semen was found in a condom obtained from the kitchen trashcan, as well as was present in Stacey Holston’s vagina and rectum, that Todd Holston’s blood was on the knife used in his stabbing, and that the socks that were found in the McGuire’s Chevy S-10 pickup truck that Lawson took off in after the slayings were in fact his.

Day four of the trial resumed at 9 a.m. Tuesday with the mitigation phase.

The day began with Lawson’s attorney, Kirk McVay, assistant Ohio state public defender, arguing that all the specifications on the murder charges should be merged as they were all a single event.

The judges turned that motion down.

Lawrence County Prosecutor Brigham Anderson entered some 250 items of evidence as being relevant to the mitigation phase of the trial.

McVay objected to several items, mainly photos, as being repetitive. The judges had all the spectators exit the courtroom so they could examine the evidence. After roughly an hour, they notified everyone that 47 items had been taken out as being irrelevant to this stage of the trial.

After that, Carolyn Taylor, Lawson’s mother, took to the stand.

Under questioning by McVay, she described her upbringing where she and nine siblings lived in a trailer and the conditions that she lived in with her own children. She said she lost custody of Lawson to his father when her son was about 1 1/2 years old. She said that there was at least one time when Lawson had a “black ear” from being pinched and that another time she took her son, who was 3 or 4 years old at the time, to the doctor because of an orangish discharge coming from his ear. The doctor said it looked like someone had poked the ear with the end of pencil, but the metal part with the eraser removed.

She said her son moved back in with her when she moved to a trailer on State Route 93 in Pedro and that is when he started babysitting for Stacey and Todd when they were working. She said he would play video games with Devin and take the boys fishing.

“He never complained about watching the boys,” Taylor said, adding that he never argued with Todd or Stacey.

She said she was surprised her son had pleaded guilty to the charges since he had told her he didn’t do it.

Taylor said she still loved her son and that she didn’t want him to get the death penalty.

“No parent wants to see their child go before them,” she said.

Forensic psychologist Dr. Bob Stinson told the panel of the judges of his study of Lawson, the official records available to him and interviews with family members.

He said that Lawson came from multiple generations of poverty, abuse, mental health issues and neglect and that it all led to Lawson feeling “more like trash, less than a person.”

He said that Lawson had post traumatic stress disorder from several life events and that with all medical and mental issues, he had tried to self-medicate with marijuana.

Mitigation in case to begin Tuesday The third day of the trial against a 2017 quadruple homicide suspect wrapped up... read more