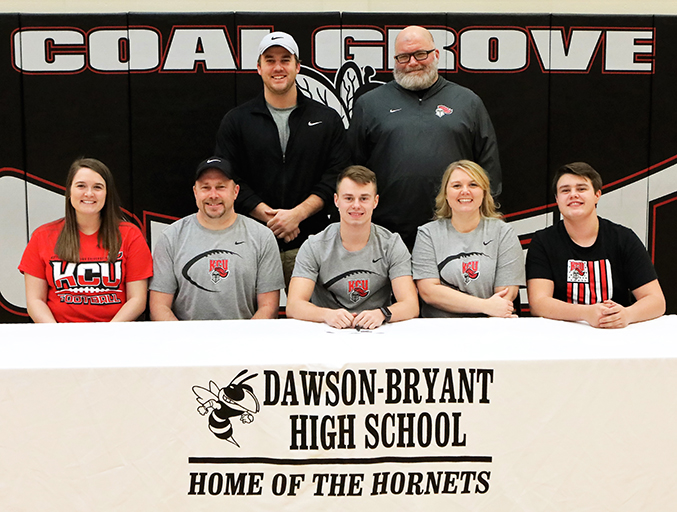 COAL GROVE — There is a saying that good things come in small packages. If that’s the case, the Kentucky Christian Knights just got a great gift on Friday.
The KCU football program got a stick of dynamite with the signing of senior running back Kyle Sites who was a two-time All-Ohio Valley Conference and Southeast Ohio all-district selection.
At 5-foot-7, 150 pounds, Sites is the typical type of player colleges might want to recruit, but the physical skills and intangibles make him that diamond in the rough.
“When you look at Kyle, his speed pops out at you rather fast. To be his size, to be competitive he has to be fast and he’s tougher than nails. He got hurt his junior year and still had 1,400 yards rushing and all those touchdowns,” said former Hornets’ head coach Evan Ferguson.
“Your goal is to put points on the board and he’s going to help you put points on the board right away.”
Pikeville, Otterbein and other colleges were on Sites’ list of potential landing places, but KCU proved to be the easy choice.
“KCU shot me a good offer and I couldn’t pass it up. I love it up there and it’s not far from home. It’s going to be the place I call home for the next four years,” said Sites.
Sites runs 4.57 seconds in the 40-yard dash which allows him to overcome larger players and make big plays.
“To me, not being as strong as everybody, I just used my speed to my advantage so nobody could catch me. I know I’m not going to be as strong as everybody, but I might be faster so that can be a big factor,” said Sites.
Sites got his chance to run the ball his junior year and had a breakout season as the Hornets went 11-2, won the OVC and reached the Division VI regional finals.
“I never had Coach (Evan) Ferguson until my junior and senior years. My sophomore year I played safety and didn’t run the ball at all. Coming into my junior year when we went to the regional finals, I moved to tailback and that’s when I started running and I also played a little slot.”
As a junior, Sites ran 135 times for 824 yards during the regular season and eclipsed 1,000 yards for the year after three playoff games. He scored 11 touchdowns as he averaged 6.1 yards a carry.
The numbers dropped some this past season due mainly to injuries that limited his carries. But he also became more of a threat as a receiving target.
“This past year I did it all as far as running the ball and playing slot,” said Sites who is expected to play slot back for the Knights.
Sites did run the ball in jayvee games as a sophomore. He said it was a change when he played offense the next year “but I loved it.”
“I’ve always been a track runner, so everybody knows me for track. Not everybody knew I was going to be a running back,” said Sites.
“Here I am now and (KCU) wants me for a slot receiver so I’m going to play slot for them and hopefully it’ll go good. I’m going to put on some weight and get going.”
Playing at the next level usually becomes a learning experience the first season and Sites understands the process. Still, he plans to work toward getting some playing time as a freshman.
“I know there are a lot more recruits getting recruited by these coaches. I’ll just give my best and hopefully get some playing time,” said Sites.
“I know I’m going to be young. Everybody starts out young. But it just matters how much work you put in and then hopefully it pays off. I just want to do my best and hopefully get a starting position and play some football.”
Besides football, Sites is part of the basketball team and he runs track.
“He plays all the sports he can here at Coal Grove and he’s a great athlete in all sports. I’m so glad he got to continue on because Kentucky Christian got a good kid for four years who’s going to help them win a lot of football games,” said Ferguson.
Sites tore his labrum at the end of his junior season and was plagued by injuries last year. Although it was frustrating, he continued to battle through it in order to continue helping the team.
“I was probably at my strongest point by junior year, but after the regional finals I tore my labrum and had to have surgery. So, coming into my senior season I couldn’t bench as I normally do, so I just kept working and lifting my lower legs,” said Sites.
“You want to play, but if you’re injured you can’t. It motivated me to get better and get through an injury and make yourself stronger.
Sites plans to major in nursing.