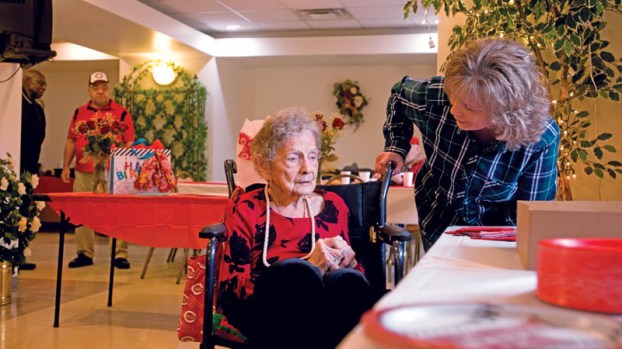 Myrtle Stover, who will turn 100 on Sunday, talks to Melinda Nance, coordinator and manager of the Ironton Senior Center. On Friday, family and friends gathered at the center for lunch to celebrate Stover achieving the century mark.

On Sunday, Myrtle Stover will have a landmark few ever reach. It will be her 100th birthday.

On Friday, her daughters and son-in-law and friends gathered for a lunch party in her honor at the Ironton Senior Center.

Stover is well known at the center. Up until she got pneumonia a few years ago, she would tirelessly stand all day putting together lap quilts for people in nursing homes. She is also known as a die-hard fan of the Cincinnati Reds.

She said the baseball team had been her entertainment for so long. Her two daughters, Norma Cooper and Sharon Meisner, both recalled that, when they were growing up in rural Athens County, their mother would bring the radio out to the front porch of their house and listen to the Reds.

Stover said hard work is what helped her reach the century mark, as did her friends that she has had through her life and her church.

As for her thoughts about being 100, she said she didn’t know.

“I don’t know how I’m supposed to feel about it,” she said, adding that she comes from a family that lives a long time. She had an aunt that lived to be 102.

Cooper said that her mother moved to a house in South Point around 2008 and she joined her new community by joining the Sybene Senior Citizens Center and then, when that closed, she started coming to the Ironton Senior Center.

The biggest surprise for Stover was that her daughter, Sharon Meisner, flew up from Florida.

“It was hard not to tell her when we talked on the phone,” Meisner said. “But I wanted it to be a surprise.”

As part of the birthday celebration, Stover got proclamations on the occasion of her birthday from U.S. Rep. Bill Johnson and Ohio Treasurer Robert Sprague.

There was also a white frosted cake with red roses made of frosting.

As for the plates that the cake was served on, there was only one obvious choice: ones with the logo of her beloved Cincinnati Reds.