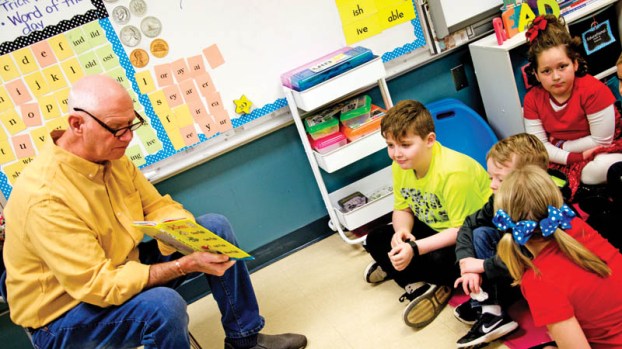 Event was part of Read Across America Week

And, as is the case every year, schools in Lawrence County and throughout the county took part in Read Across America events to honor the writer and illustrator.

At Dawson-Bryant Elementary, the school hosted a book fair, as well as dress-up themes for students each day, such as wearing Read Across America T-shirts, or dressing as their favorite book character.

On Wednesday, the these was to “cozy up” with a good book and students wore pajamas and had a half hour set aside to read, principal Angie Lafon said.

“They were so into the books,” she said after going around and observing the students taking part.

The events culminated on Friday, when the cafeteria served green eggs and ham and students were given a cupcake to mark the birthday.

As has been the case for the past three years, each classroom was visited by guests from the community, who read a Dr. Seuss book aloud to students.

Stover celebrated with cake, proclamations On Sunday, Myrtle Stover will have a landmark few ever reach. It will be her... read more