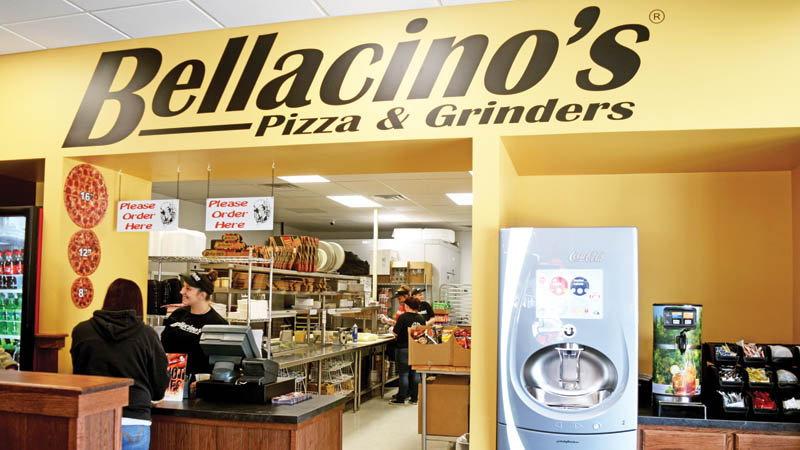 Bellacino’s Pizza and Grinders opened its new location in South Point on Commerce Drive on Monday.

SOUTH POINT — The wait is over and the first pizzas were coming out of the oven at the new Bellacino’s Pizza and Grinders location on Commerce Drive on Monday.

The new restaurant, the first in a projected five tenants for a new 9,000-square foot strip mall next to the Lawrence County Chamber of Commerce, opened its doors for business that morning.

Business was brisk for a weekday afternoon, as locals began dropping by to try out the new food options.

“It started strong and it will keep going,” Joseph Kingrey, the general manager, said.

Richard Mikel, who also owns Bellacino’s franchises in Barboursville, which opened in 2011, and Russell, which began in 2015, said the location has hired a staff of about 25 so far.

He said they plan a grand opening and ribbon cutting when the weather warms up.

“We’re going to wait at least a couple of weeks,” he said.

The restaurant has a full Italian-themed menu, including pizzas and grinders, which is their specialty, he said.

“Everything’s fresh, produce-wise, too, all of our vegetables,” Kingrey said.

Bellacino’s began in 1950 and began franchising in 1997. Mikel said most of their locations are in the eastern United States.

“We’re happy to be here in South Point,” he said, adding that they also have online ordering and pick-up service and offer catering for local businesses.

Mikel said those who want to contact them to order can visit www.bellacinos.com or call 740-523-0200.