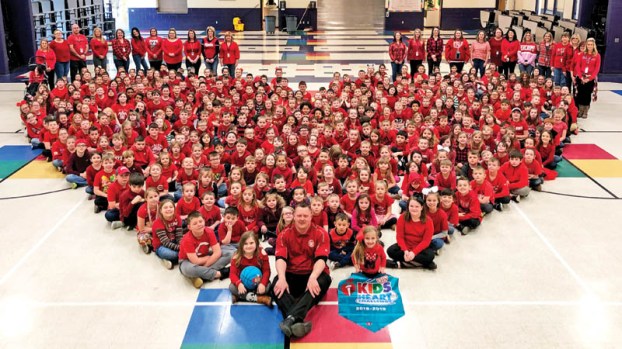 Chesapeake Elementary students form a heart on Tuesday as part of the school’s assembly for the Kids Heart Challenge.

CHESAPEAKE — For the past several weeks students at Chesapeake Elementary have been going to the community to collect funds for a good cause.

It was part of the Kids Heart Challenge for the American Heart Association.

It wrapped up with an assembly on Tuesday at the school and, according to principal Trisha Harris, the school raised $8,202 in the campaign.

And two of the school’s most successful fundraisers were honored for their extra effort.

Bella Marks, 8, of the second grade, said she had been collecting for several weeks from family and friends.

The daughter of Jeff and Sarah Marks, she said she was able to bring in $1,020.

It feels good,” she said of contributing to the cause, which she said she has done in previous years.

The daughter of Chris Dillon, Karissa Damron and Katie Dillon, she was taking part in the effort for a second time.

She said donations were collected from everyone around her.

“Some of my mom’s friends at work, my family and other people,” she said.

She had a unique motivator for her work, as her family members agreed to take part in challenges when she met her goals.

Her stepmother was doused by a bucket of ice water, her father kept a mousetrap on his hand, while others received a pie to the face.

Dillon said she was happy to contribute to the American Heart Association.

“It made me feel good,” she said. “Because we’re helping people with heart disease. I have a friend who has to have heart surgery.”

SOUTH POINT — The wait is over and the first pizzas were coming out of the oven at the new... read more