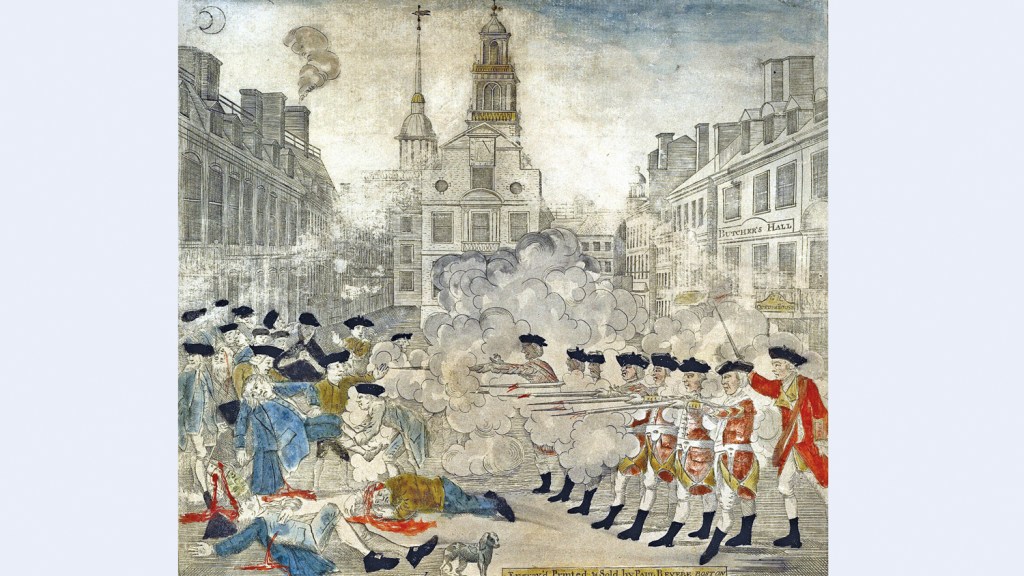 Public domain A detail from Paul Revere’s engraving, purporting to depict the events of the “Boston Massacre.” The piece, which was widely distributed in propaganda campaigns by pro-revolutionary groups, intentionally contained at least five inaccuracies by Revere.

On May 28, 1754, George Washington and his Virginia force surprised a party of 33 Frenchmen near Great Meadows, Pennsylvania. The French commander was killed and Washington’s force took more than 20 prisoners.

In that unnamed ravine in southwestern Pennsylvania, the first act of a world war occurred.

On May 18, 1756, England declared war on France, beginning the Seven Years’ War in Europe. The war in North America would be called the French and Indian War and the expansion of this war to Europe, Asia, Africa and the high seas would be named the Seven Years’ War (1756-1763). The winner of this world war would later call those bloody years the “Great War for Empire.” The Treaty of Paris in 1763 saw England win a great victory over France and Spain. England became the world’s greatest colonial and maritime power.

The wars had exhausted England’s treasury and resulted in a public debt of 135 million pounds. Should not the 13 English colonies be grateful to “Mother England” for stopping French and Indian invasions from Canada and the acquisition of new lands? Why not ask the 13 colonies to pay 1/3 to 1/2 of the public debt?

In 1764, the Sugar Act was passed, to be followed by the Stamp Act, the first direct tax placed upon these North American colonists. The colonists were willing to be taxed by their own legislatures, but not by a king and Parliament 3,000 miles away.

Colonial associations called the Sons of Liberty destroyed records and attacked the property of stampmasters. The colonies decided to boycott British goods. The Stamp Act was repealed, but was followed by the Townshend Duty Acts that placed taxes on imports of glass, painters’ materials, lead, paper and tea. New importation by the colonists resulted in the repeal of all the Townshend duties, expect the one on tea.

With such a lack of colonial cooperation and outright commercial defiance on the part of the colonists, England sent two regiments of infantry, the 14th and 29th, to Boston, the hotbed of rebellion. The Redcoats, foreigners, lobsters or bloody-backs arrived in October 1768. The citizens of Boston refused to guarantee or supply the troops.

Two more regiments would arrive in later months and were also refused support. A noticeable hostility to the British troops brought on tensions in Boston. In a short time, the Redcoats in Boston would number 1,000.

Among the British soldiers were many Irish Catholics whom Boston Protestants disliked. There were black troops stationed in Boston and Bostonians who had black servants feared the free movement of the black soldiers.

Samuel Adams, the ‘Father of the American Revolution,” had trained his dog, Azore, to bite British soldiers. Adams stated, “Where there is a spark of patriotick [sic] fire, we will enkindle it.”

As tensions heightened in Boston, violence reared its ugly head. On Feb. 22, 1770, a crowd stood outside Ebenezer Richardson’s home in Boston’s north end. Richardson was thought to be an English informer in Boston. Richardson and family were inside the home as the crowd threw eggs, fruit peelings, sticks and stones.

Most of the house’s windows were broken, as well as the front door. A rock hit Richardson’s wife. Richardson loaded his musket with bird pellets and fired into the crowd. An 11-year-old boy, Christopher Seider, fell to the ground with 11 pellets in his chest and abdomen. He died that evening.

The crowd cornered Richardson and he surrendered and would be charged with murder. On Feb. 26, 1770, Christopher Seider was provided “the largest funeral known in America.” Sam Adams organized the funeral, as thousands came to pay their respects. He made Seider a “juvenile martyr.” Word spread that Richardson had been an informer for British customs commissioners.

A man there asked Walker, “Soldier, do you want work?” Walker replied, “Yes, I do.” The man then told Walker, “Well, then go and clean my outhouse.”

A fight then began — only four days after Seider’s funeral. Walker, after being beaten badly, got away and returned to the ropewalk with some fellow soldiers. Both groups fought with clubs and the British soldiers were driven away.

On March 3, 1770, three Redcoats came back to the ropewalk and fighting broke out again and the soldiers were repulsed. A British sergeant turned up missing and his body has never been found!

On Monday, March 5, 1770, a foot of snow covered the ground in Boston. Most of the city’s 16,000 people were staying indoors, but not Pvt. Hugh White of the 29th Regiment. He was on guard duty at his sentry box at the corner of King Street and Shrimton’s Lane.

At about 9 p.m., a young wigmaker’s apprentice, Edward Garrick, called out to White. Garrick said a Capt. Goldfinch refused to pay the wigmaker for dressing his hair. White told the boy to come closer and hit Garrick in the head with his musket.

Within minutes, a crowd of Bostonians had assembled. A false fire alarm occurred as people turned out with buckets to fight a fire. Bostonians of all ages came to King Street, but there was no fire.

Capt. Thomas Preston had been sent word by White to bring reinforcements. The crowd had increased to 400 when Preston arrived. He wanted to march all eight soldiers back to their Main Guard headquarters.

Boys pelted the British soldiers with snowballs. Women threw oyster shells upon them and, out of the darkness, came chunks of ice and clubs. British soldiers were not allowed to fire their muskets without the authority of civil magistrate — such an official was to read the “Riot Act” first.

James Murray, a justice of the peace, tried to read the “Riot Act,” but snowballs and ice chunks drove him from the scene. Nine British soldiers were backed up against the customs house and people in the crowd began to beat their clubs against the soldiers’ musket barrels and bayonets.

Preston told the crowd he did not intend to fire upon them. A club from someone in the crowd hit one of the nine soldiers. Pvt. Hugh Montgomery fell to the crowd and dropped his musket.

Someone — Preston, one of the eight soldiers, or someone in the crowd yelled “Fire!”

The soldiers fired two volleys in a short period of time. They were preparing to fire again when Preston shoved their gun barrels down. 11 Bostonians fell to the ground. Five would die and six were wounded. The first to die was a black seaman named Crispus Attucks. The others who died were Patrick Carr, Samuel Gray, Samuel Mavrick and James Caldwell.

Samuel Adams would label this event the “Boston Massacre” in his widely-read, 19-page pamphlet. The soldiers were removed to Castle William, an island fort in the harbor.

All nine British soldiers were charged with murder. John Adams and Josiah Quincy defended Preston and his soldiers. Preston and six of the soldiers were found not guilty, while Matthew Kilroy and Hugh Montgomery were found guilty of manslaughter. These two of the nine Redcoats were branded on their thumbs.

Every March 5, until 1783, a major speech would be given by a leading patriot to remember the “massacre.” For three years, there was relative calm in Boston, but, at the end of 1773, there would be a tea party.

Another side of the story:
As a youngster growing up in Ironton, I often saw on restroom stalls and walls a peculiar scrawl; — “Kilroy was here.”
I saw this at Lake Vesuvius, the Star-Lite Drive-In Theater, at truck stops and at restaurants. I naively thought to myself, “Boy, this Kilroy has visited everywhere in the Tri-State!”

This phrase was also scribbled everywhere by U.S. troops in World War II and was widely seen in Ironton as early as 1946.

On March 5, 1770, Pvts. Matthew Kilroy and William Warren were among the nine British soldiers in front of the custom house. Some of the crowd recognized them from the ropewalk fight four days earlier and began to harass these two.

Kilroy was one of the two British soldiers whose thumbs were branded.