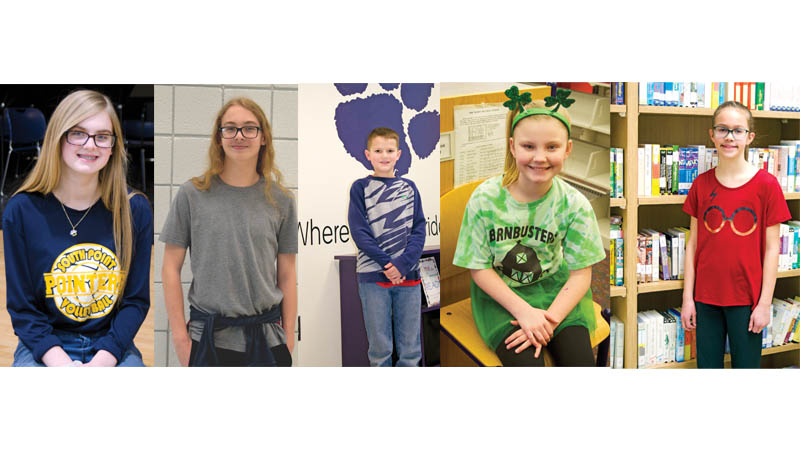 Five students from Lawrence County are set to go to Ohio University in Athens next weekend, having earned their way through their spelling prowess.

The regional Scripps National Spelling Bee is set for March 23 at Ohio University and, to take part in the competition, students had to win the spelling bee at their individual schools, then qualify through an online test.

Julie Walters, of the Lawrence County ESC, said that the number of students going to regional this year may be a record for the county.

The daughter of Shanna McKenzie and Harry Parks, she was the champion at the annual Lawrence County Spelling Bee in December after successfully spelling “gardenia.”

This will be her third visit to the regional bee and McKenzie has been involved in the spelling competition since the fourth grade, the first year she was eligible to enter.

In seventh grade, she won her school’s bee, the district bee and, while she was not present for the county bee, again qualified to compete in the regional bee, placing 20th.

She has been hard at work, preparing for next week’s event.

“I’m constantly studying and reading,” she said of the lists of words used for the competition.
McKenzie is a member of the Junior National Honor Society, takes part in Model United Nations and is on the school’s Quiz Bowl team. She is also in the Talented and Gifted program and plays volleyball.

She said she hopes to go into a career as a computer engineer after finishing school.

While she brought home the county trophy, this year is also bittersweet for her because, as an eighth grader, she is now in her final year of eligibility for the bee, which she said she “absolutely loves.”

“I’m brokenhearted that it’s my last year,” she said. “It’s something that’s characterized me as an individual for so long.”

Another eight grader going to Athens to compete this year is Justin Goodwin, 14, of Chesapeake Middle.

The son of Melissa and Jerry Goodwin, he is fairly new to Chesapeake, having moved to area and enrolled at the school this year.

Goodwin said it is his first year of involvement in the bee, as his former school in Ashland did not take part.

He said he has much assistance in preparing for the event in Athens.

“I’ve been getting a lot of help from friends around the school,” he said. “Parents and friends with a history in spelling bees and writing. And the school administration has been a major help.”

Goodwin said he is interested in getting into National Junior Honor Society, but, so far, this year he has been “getting into the flow” of his new school.

He said he is also involved with organizing a debate club with students at his former school.

Outside of spelling bees, he said he spends his time hiking on the land his family has bought and is interested in debating and politics. He also has an interest in computer programming.

“I do a lot of online work and coding,” he said.

The son of Mindy and Andy Clark, of Chesapeake, he placed fifth in the county bee this year, his first time competing.

“It felt amazing,” he said of winning the school bee and qualifying for the regional by taking the online test.

Like the others, he said he has been studying in anticipation of the big event.

“I’ve been getting flash cards and looking at all these languages,” he said, referring to the lists of word origins. “The teachers bought me an app and I’ve been reviewing the words.”

Another fourth grader qualifying for the regional bee in her first year of competition is Meredith Rogers, 9, a fourth grader at Rock Hill Elementary.

The daughter of Elizabeth and Ryan Rogers, of Ironton, she placed sixth at county bee in December.

When asked if the online test was hard for her, she replied “not really.”

She said she has also been reviewing the words as the date in Athens nears.

“I write them out,” she said of her method.

She said she hopes to continue with the spelling bee in coming years.

In addition, she is involved in youth farming and is a member of Barn Busters 4-H club. She said she also has an interest in athletics.

“I like to play sports, especially basketball,” she said.

The Proctorville resident is the daughter of Maryanne Dunlap, a kindergarten teacher at Fairland East, and Brian Dunlap, a pediatrician.

As the bulletin board of photos at the school shows, Dunlap is an accomplished student, having, this year, won the school’s bee, received a trophy for an outstanding project at the school science fair, placed in the Lawrence County Retired Teachers writing competition and, last year, earned a reading award trophy.

When not involved in the bee, she said she plays soccer and is an avid reader, favoring the Harry Potter and Lemony Snicket book series. She also likes to attend church with her friend, Claire.

“I’m a little nervous,” she said of going to the regional bee. “And I’ve been trying to study every day.

She said, to prepare, she has been using the program Word Club on her computer and taking quizzes based on the Scripps National list of words.

“I study mostly from the computer, but my parents and the family help me from sheets of words sometimes,” she said.

From the regional bee, students can qualify to take part in the national bee, set for Washington, D.C. later this spring.

The last Lawrence County student to make it to that event was Felicity Jenkins, a 2016 Symmes Valley High graduate, who qualified in 2010 while in the sixth grade.