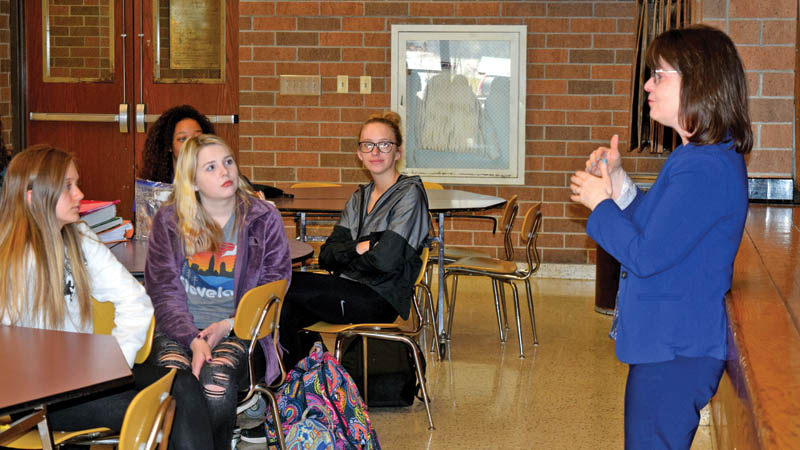 Ohio Supreme Court Justice Judi French is the latest in a series of local and state leaders to visit Chesapaeke High School to speak with students.

CHESAPEAKE — Members of the student council at Chesapeake High School had a prestigious visitor on Monday.

Ohio Supreme Court Justice Judi French visited the school and took part in a question and answer session with the group of about 20 student council members and officers.

They had no shortage of questions, asking French about her early background, judicial career and future political plans.

She said the makeup of Ohio’s Supreme Court has changed some, since she began, going from a 7-0 Republican court to electing two Democrats in 2018.

Although court seats are nonpartisan on the general election ballot, candidates are endorsed by political parties earlier in the year.

French, who identifies as a Republican, spoke about the challenges of running in a nonpartisan race.

“The hardest part is getting your name out there,” she said, offering one way she tries to make hers stick with potential voters. “I often tell them, ‘You may not like the French part, but you might like Judge Judy.’”

She spoke about the difference in a liberal and conservative judicial philosophy, something she said differs from the traditional liberal vs. conservative spectrum in politics.

“Conservatives believe in conserving the power of the court and their role is limited,” she said. “While a liberal would use that power more liberally and more likely go outside the narrow confines.”

The students wanted to know if she had higher plans and French said there are really only two judicial positions she could ascend to — chief justice of the Ohio Supreme Court or to a federal judgeship.

To get a federal judgeship, she would need to be appointed by President Donald Trump.

“And that’s unlikely,” she said, pointing out that she is in her 50s and that picks for those positions tend to skew younger.

French invited the students to come to Columbus and see the court for themselves and take a tour of the building. She said she would be glad to meet with them when they did, something principal Chris Smith said they would be interested in.

As a parting message, she told the students to think about education beyond high school, whether it is a college or trade school.

“Yes, college education is important, but so is not coming out with a lot of debt,” she said, adding that the focus should not be on simply getting into the best, most expensive college. “But the best college you can afford.”

“It’s been a good mix,” Smith said, noting the gender breakdown of the guests and that they have had visitors from local, state and federal office.

He said it was an honor to host French.

“It’s great that she came down,” he said. “And she was so relatable to the students.”

He said the school is especially thankful to Johnson, whose office has helped book other visitors. Johnson’s field representative for the county, Juli Stephens, was present for Monday’s session.

French, whose husband is a graduate of Marshall University across the river from Chesapeake, said she would be interested in a return visit.

She said the talk with students was “a fun one,” and praised the students for their engagement and curiosity on the subject of the court.

“They had such insightful questions,” she said. “I really enjoyed it.”