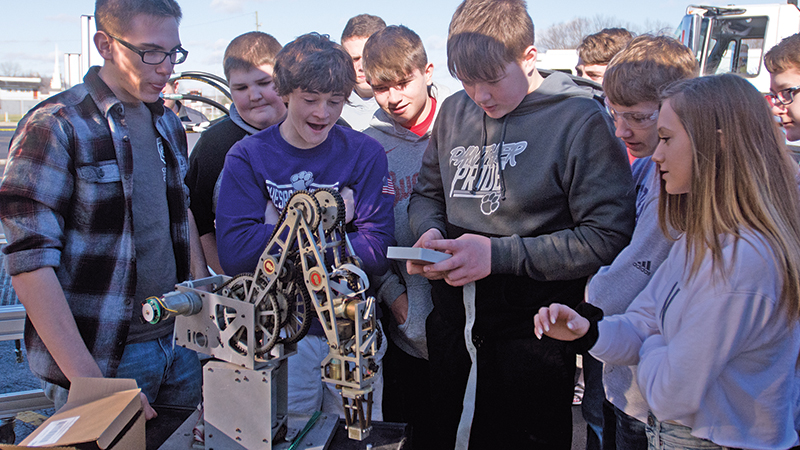 On Friday morning, the campus of Ohio University Southern was taken over by a batch of younger than normal students.

Some 650 high school freshmen from all over the county came to the first Lawrence County Career Symposium at the campus to get an idea of what career paths are available and learn about what to expect once they get into the workplace.

The students were divided into groups and toured different parts of OUS, while others were in the Bowman Auditorium, listening to lectures about workplaces and other subjects.

Another stop was in the parking lot, where there were booths and heavy equipment set up.

The two most popular booths were the Collins Career Technical Center and the OUS Equine Studies program.

At the CCTC booth, students could watch a 3D printer build a plastic object or try to make a robotic arm pick up a small steel cylinder. A crowd gathered around as students took turns fighting with wheeled robots.

Justin Hutchinson, of Chesapeake High School, said he was enjoying the symposium.

“It’s been cool,” he said. “It’s been fun. I liked the robotic arm because I can actually work with it.”

Jayden Jones, a Chesapeake High School student, was interested in the robotics booth, too.

“It’s just cool,” he said. “It’s fun to watch the robots. It is interesting how they work.”

He used a remote control to use a robot to fight another robot. And he did win.

“I grabbed his wheel and then just backed up,” Jones explained. “I also liked the drones.”

Another popular stop was visiting Gus, one of the horses from the Equine Studies program. He happily ate hay while being fawned over and petted by students.

Brian Pancake, a foreman with Hecla Water and a member of the Lawrence County Business Advisory Committee, said that the students who stopped by the booth were kind of surprised with everything it takes to get water into houses and businesses.

“We showed them what it takes to keep the water flowing and what it takes to be a Hecla Water worker,” he said. “They were surprised to find out that we work when it is hot or cold and it can be a wet, muddy job. A lot of them were surprised that we have situations where we work all through the night or for three days straight to get water to our customers. We had a lot of good comments, a lot of good questions.”

Julie Walters, Student Services coordinator with the ESC, said they were asked this year by the Ohio Department of Education to form a business advisory council and to come up with events that promote education and aligning that education with the needs of local businesses.

The symposium was one of the events they had come up with and it was meant to promote both college and technical schools options to all students.

“We have a lot of occupations around here that require different skill sets,” Walters said. “In your traditional career fair, you see a lot of occupations that require a college degree,” she said. “We wanted to make sure this was something that included technical skills. We have CCTC here, along with Mountwest and our nursing programs and our equine studies. There are a lot of options for students; we don’t want to push them into one direction. We want them to decide what is best for them.”