Davis finds what she wants with WVSU volleyball 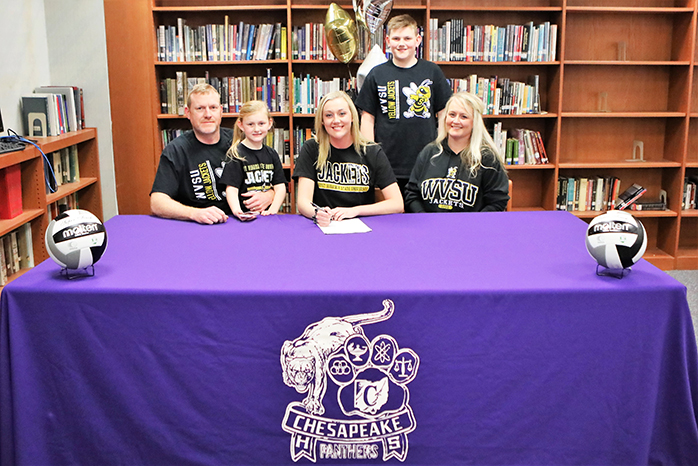 CHESAPEAKE — Early on, Karli Davis wasn’t sure what she wanted or what she needed. But with some tough love, she found the answer to both.
The Chesapeake Lady Panthers senior found that what she wanted was volleyball and the path to get there was from her parents and coach.
With all that settled, Davis signed a letter-of-intent to play for the NCAA Division II West Virginia State Yellow Jackets.
Davis said she was taught and pushed hard by her parents — Chesapeake boys’ basketball coach Ryan Davis and his wife, Renee — as well as Lady Panthers’ head volleyball coach Rebecca Cremeans.
Davis said she was verbally committed to Cumberland (TN) University. Not only was she excited about the opportunity, she said West Virginia State wasn’t even on the planning table.
“There was an article in the paper and the West Virginia State coach (Kris Kern) saw it and that whole week he came to the school and met with me, ended up having me go on my official visit that same week and everything just kind of clicked,” said Davis.
Cremeans said it is Davis’ work ethic that sets her apart from other players.
“Karli is one of, if not the hardest working volleyball player I’ve had,” said Cremeans. “Since I’ve known her, she’s never shown anything but the desire to get better. That comes from nothing but your heart.”
Oddly, volleyball was not Davis’ first love. In fact, it was something she didn’t really like.
“I started playing volleyball in middle school and I didn’t really like it. I was more of a basketball girl.,” said Davis.
“I got into high school and we got a new coach and I bought into her culture pretty quickly and after that it was kind of night and day between volleyball and basketball and I knew this is what I wanted to do my freshman year. After that, it was just the goal to play college volleyball.”
The hard work didn’t come naturally or by accident. Davis said her parents were the driving force.
“My mom and dad have influenced me the most my whole life, not just the past four years. They don’t sugarcoat anything. One time I think my actually told me I sucked, literally word for word. That was a slap in the face, but it makes me want to work harder and it also makes me want to respect the game and the coaches a lot more than typical kids do now days,” said Davis.
“I happened to see it first-hand being a coach’s kid, but it’s pretty driving to have them in my corner screaming at me all the time. I didn’t appreciate it at first when I was younger, but now I’m starting to learn that they only want the best for me.”
Davis was an All-Ohio Valley Conference first team selection and the Division III Volleyball Coaches District 13 Co-Player of the Year.
“I was excited, but I knew that a lot of that wouldn’t have happened if it wasn’t for my teammates and my coaches. I was more appreciative of them than I was of my accomplishment,” said Davis.
Obviously, there is more work ahead as Davis transitions from high school to the college level. She said that playing travel ball has helped with the transition.
“I play on a travel ball team for West Virginia State and their coach actually coaches our team, too. We scrimmage the West Virginia State girls every weekend and seeing them play it’s definitely a lot more fast-paced than high school,” said Davis.
“But the way (Kern) coaches is a lot similar to the way (Cremeans) did, so hopefully it’s not going to be that hard. But I know it’s going to take a lot of adjusting and getting used to it.”
Although she is currently playing right side and some middle, Davis said that Kern “is kind of testing everywhere to see which is going to fit better. We have a setter from Spring Valley (W.Va.) who I know and we’re kind of adjusting to each other right now.”
Davis has no illusions of grandeur, but that won’t stop her from working to achieve her plans to play at the next level.
“I think a major goal is my first year just getting in and maybe not being the player who starts but the player who pushes players in practice and makes myself better for the team and benefit it as much as I can,” she said.
Davis is planning to major in child development. And taking a page from her father, she admitted to be open to doing some coaching.
“I could coach a travel ball team and make some money off that, so I might end up doing that depending on how much school work I have going,” said Davis.