Kimbler gets what he wanted after signing with Shawnee State 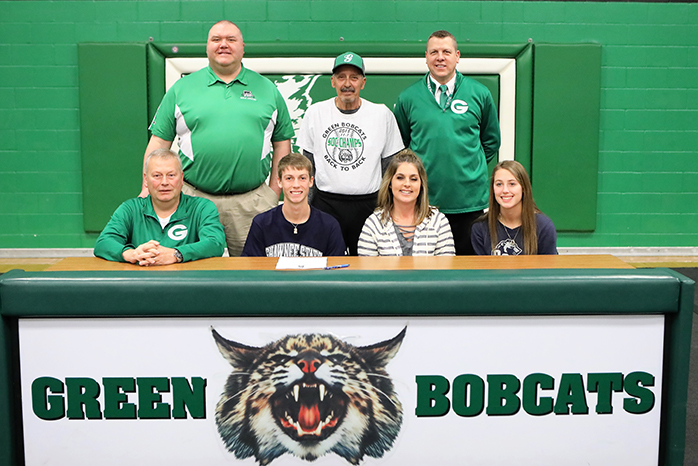 FRANKLIN FURNACE — Tanner Kimbler got what he wanted and then some.
The Green Bobcats senior baseball standout has had his eye on attending Shawnee State University after graduation. He not only made that dream come true on Friday, but he put the icing on the cake by signing a letter-of-intent to play baseball for the Bears.
“I’ve always wanted to go there. I was probably going there no matter what,” said Kimbler.
“Then I got this opportunity (to play baseball) and I took it because Shawnee was so close to home and I didn’t want to move away.”
Green head coach Dan McDavid said Kimbler is as impressive off the field as on in terms of understanding the game of baseball as well as life.
“He’s a great kid. He actually wanted to play at Shawnee because of the education. That’s how I announced it. I put it out there the signing date was to further his education,” said McDavid.
“He’s a hard-working kid, he has a high baseball IQ, he just does everything right. He’s just been a joy to coach. I’m proud of him and I’ve been blessed to coach him.”
Kimbler has been the Bobcats best pitcher but he is a slick-fielding shortstop when not on the mound. In fact, he said Shawnee is looking at him to join the depth chart at shortstop.
“They want me in the middle infield more than likely. In the batting lineup, they just want me to get some hits,” he said.
“I’d like to start and make an impact on the team, but honestly, I have no idea about that. As I get more and more with the team, we’ll see how it goes.”
Besides baseball, Kimbler was an all-conference running in cross country as Green won back-to-back Southern Ohio Conference titles.
More notably is his basketball career that saw him average 20 points a game this past season and score more than 1,000 points in his career. He is a two-time All-Ohio selection in Division IV.
But baseball has always been first on Kimbler’s list of sports he likes to play.
“Ever since I was little I always played baseball. I play basketball and I play the season, but then after that I’m done. I play the baseball season and then I keep playing baseball all summer long,” said Kimbler. “I have more passion for baseball I guess.”
Kimbler said he is uncertain as to when he began playing baseball, but he laughed that he thinks he was one-year-old.
“I know that I batted right-handed and dad was switching me before I was two to bat left-handed,” said Kimbler whose father, Tony, also played for McDavid and was a pitcher and infielder on the Bobcats only team to reach the state tournament.
“Me and dad watch games. If we don’t have anything to do, we’ll come over to the baseball field and hit a couple, throw a couple, take some grounders,” said Kimbler.
But dad isn’t the only influence. He said his mother, Amy, has always been a driving force as well.
“My mom and dad have always pushed me to do my best in everything, not just sports. But me and dad have this thing going on for baseball and we’ll just keep it going on,” he said.
Kimbler had serious talks with Rio Grande but opted for Shawnee State due in part to the academic program that was offered at the school.
Kimbler plans to major in physical therapy. Teammate Bryce Ponn also signed with Shawnee State and plans to major in physical therapy.
Is there a chance the pair could one day open a business together?
“Yeah, why not,” said Kimbler.
And they can spend their free time talking baseball.