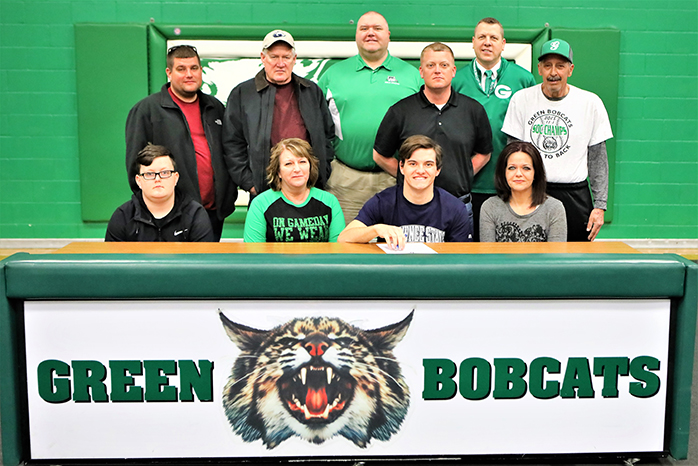 FRANKLIN FURNACE — There’s a good chance that Bryce Ponn’s family photo album has a lot of pictures that might appear to be the same photograph with the exception of uniform color and a progression of age.
Baseball was injected into Ponn’s veins at an early age and his heart now beats to the sound of a baseball hitting a bat, and his heartbeat will continue to pound in the future after signing a letter-of-intent on Friday to play for the Shawnee State University Bears.
The Green Bobcats’ senior third baseball said getting the opportunity to play college baseball has been a lifetime goal.
“I remember going out in the yard with a whiffle ball and a whiffle bat and my grandma (Kathy Gray) throwing to me. That’s something that’s lived in me all the way up until now,” said Ponn.
“I think it’s going to take a lot of work. They say that freshmen coming in don’t get that playing time because they don’t have the next level experience. I’ve been ready to play college ball ever since I can remember. It’s been the start of a dream since I was a little kid.”
Along with baseball, Ponn played two years of football and a year of basketball, but baseball remained the constant sport in his athletic schedule.
“It grew on me at a young age. They told me I was swinging a baseball bat before I could even walk. I had family support all the way through,” said Ponn.
“I started playing tee ball early. I started playing tee ball when I was three and I haven’t missed a year since. Every year it grows stronger. It’s the connection I have with the sport itself.”
A versatile player, Shawnee State has plans to play Ponn at third base and possible get some work at first base.
Green coach Dan McDavid knows Ponn is a good baseball player, but he said there are some far more important qualities the Bobcats’ infielder possesses beyond the playing field in terms of character and the importance of education.
“He was looking for a place to go to school, but in the back of his mind he wanted to play baseball,” said McDavid.
“He does all the right things. He played summer ball, he went to showcases. That’s what you’ve got to do now to play at the next level. He pays attention to detail. He’s a super, super kid and a smart kid. I’m proud of him and I’ve been blessed to coach him.”
Ponn looked at attending Marshall and Ohio University Southern, but he decided on Shawnee State in order to combine academics with the chance to play baseball.
“Over the last couple of years, I decided I wanted to go into physical therapy. I was kind of indecisive, but this last year has really kicked it in for me,” said Ponn.
“I wanted to stay local and those were the closest (schools) I wanted to go. It was more local than the other two. Even if it’s not the weekends, I could go home during the week and do whatever I needed to do. If I needed family support, I could go get it whenever I wanted. I like the environment. I know a lot of people from here who go there. It’s a very local school.”
Get the camera ready. Looks like some more pictures for the photo album.